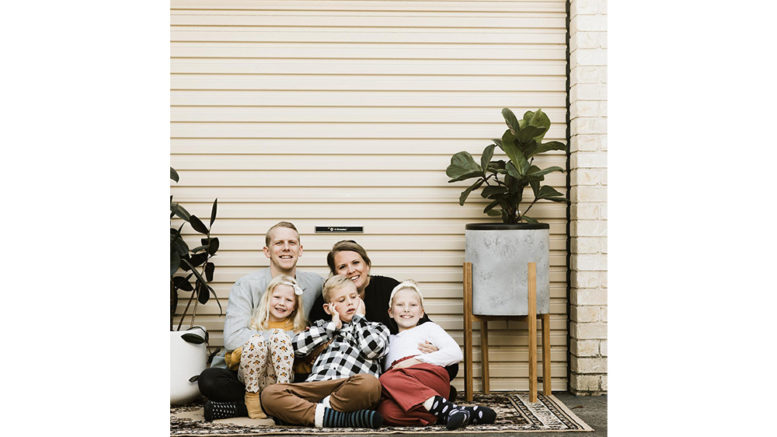 Andrew Hood with his wife Amy and three children

After feeling fatigued and a little exhausted, Andrew Hood of Kincumber went to the doctors to get checked and came out with a diagnosis of a rare type of blood cancer called Epithelioid Hemangioendothelioma.

The active 32-year-old is a loving husband and devoted father to three young children.

Hood has had to stop working to make time for his chemotherapy.

Hood’s sister-in-law, Chloe Siv, has started a GoFundMe campaign which she said will go towards living costs and the car trips made to Sydney for the treatment.

“Andrew and my sister Amy have been married for over 10 years and have three kids,” Siv said.

“This year, Andrew started his own consulting business and was doing pretty well,

“He was feeling a little fatigued, which he put down to stress.

“But when he started having abdominal pains, he went and got it checked.

“After a few tests, the doctors said something wasn’t right, and that was how he got his diagnosis.”

Siv said one out of every million cancer diagnoses is Epithelioid Hemangioendothelioma.

“There is no known cause,” Siv said.

“Andrew is healthy, fit, and very active, and they really take care of themselves.

“It has been an absolute shock.

“He is definitely staying positive and trying to keep things as normal and consistent for the kids as possible.

“His middle child has quite severe autism, completely non-verbal, and goes to Aspect Central Coast School in Terrigal.

“He has quite severe additional needs with lots of therapies required, so they are just trying to keep things particularly normal for him to help him stay in his routine.

“Chemotherapy is every week for as long as his body can take it.

“Because the cancer is so rare, all the doctors can say is wait and see.

“The unknown is stressful, but it is also hopeful.

“It does not need to be a negative; ‘wait and see’ can be really positive.

“I started the GoFundMe page because my brother-in-law won’t be able to work and he is the sole income earner of the family.

“It is really important for all of us to take that financial pressure off him so he can focus on getting better.

“I just wanted to provide some practical help.

“I would love to be able to help them stay in their house and pay their mortgage.

“Andrew is the best dad you will ever meet.

“He is hands-on, so involved, funny, and will play with his kids for hours, that is one reason why we all love him.”

The GoFundMe campaign has already reached over $22,300.

To donate, go to www.gofundme.com/f/andrew-amp-amy-hood/donate#

CWA ladies pump up the jam