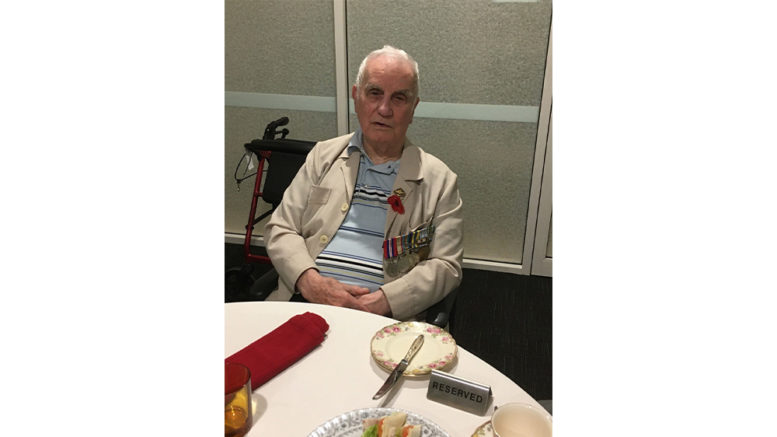 With 12 years in the navy, a marriage ceremony in his 80s, and years of charity work under his belt, Keith Thompson-Burke (also known as Thompson-Baggs), has lived a full life.

Now 98, Thompson-Burke has been thanked for his World War II service, receiving a certificate and medallion from local ex-naval officer, Kerry Spencer.

The presentation for the Point Clare local was held on November 20 at West Gosford RSL and included a small presentation and afternoon tea.

Judith Edgington and her husband have become his legal guardians and hold Power of Attorney and said Thompson-Burke is a very humble person.

“He kept saying ‘I’m just an ordinary bloke, why all this fuss’,” Edgington said.

“He has been a wonderful man and a loyal and loving husband.”

Born in South Australia, Keith Thompson-Burke went through many foster homes and was finally adopted by Elizabeth Baggs, changing his name by choice to Keith Thompson-Baggs.

He spent the next 12 years serving as a stoker mechanic on the HMAS Melville in Lonsdale, Shropshire, Hobart, and then Sydney.

After leaving the navy, Thompson-Burke, moved to Sydney and worked for the General Post Office for 30 years, eventually moving to Central Coast with his first wife, Meg.

He spent 20 years as a Legacy Australia worker, caring for the dependants of deceased Australian servicemen and women as well as serving 50 years as a freemason.

Meg sadly passed away with Thompson-Burke caring for her until the end.

Following the tragedy, he threw himself into more work with Legacy and also joined a Probus club, remaining a member until going into care.

A time later, while working with Legacy Australia, Thompson-Burke met Glen, a secretary, whom he married in his 80s.

Glen has since passed away, and Thompson-Burke now lives at the BaptistCare Orana Aged Care Centre.

Edgington sees him every week and said he is very happy in his care home.

“We all owe Keith a big thank you for his effort in helping to keep our country safe so that today we can live in a free country,” she said.