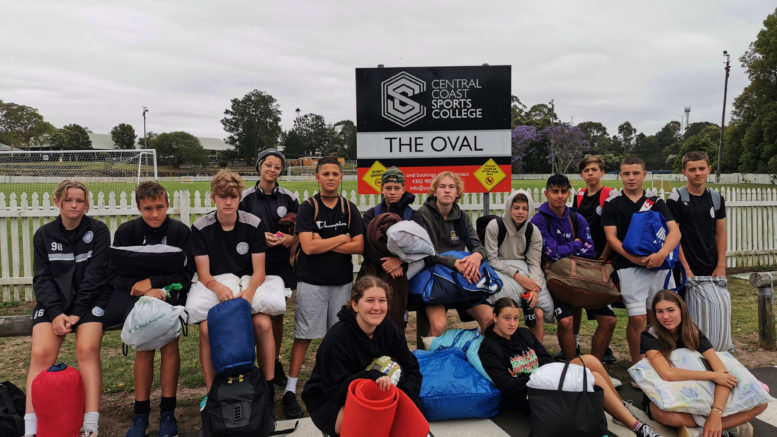 Central Coast Sports College Year Nine student, Paige Stanford, has held a sleep out for her peers to highlight the plight of homelessness.

The sleep out consisted of student volunteers staying overnight at the school on minimal sleeping material, a soup kitchen for dinner, and guest speakers from charities Orange Sky and EatUp.

Paige said she chose homelessness because it was a common issue that she wanted to learn more about.

“My projects in the past have always been on doing something to help,” Paige said.

“I had no idea what it would be like to be homeless, and I wanted to know more about it and how it feels.”

Speakers from the two charities shared stories and facts about homelessness on the Central Coast and around Australia.

“We made sandwiches with the Eat Up company who travels around and gives lunches to kids who go to school without lunches,” Paige said.

“We also had a soup kitchen style dinner, so we just had soup in a cup and one piece of bread with no butter.”

“We set up a sheet on the tennis court and played the movie Pursuit of Happiness.

“After that, we went to one of the classrooms and slept on the floor.

“At three in the morning, we got woken up and moved to another space at the other end of the school.

“We woke up at 7am and had a celebration with pancakes.

“You could see the other kids’ faces the next day; they were tired and complaining, and I was telling them that this is what people who are sleeping rough go through every day.”

“The guest speakers gave the kids an understanding of the situations leading to sleeping rough and also how big it is in Australia and on the Coast.

“It was a great way to open the kids’ eyes and show them how they can play a small role to have a better impact on someone else’s day.

“There was great feedback (for Paige) from her peers and the positive impact it has had on them, and also that sense of privilege, of while they think they may be in a rough spot, there are other people out there who would love to live a day in their shoes.”

Together Home program to reduce the number of people sleeping rough