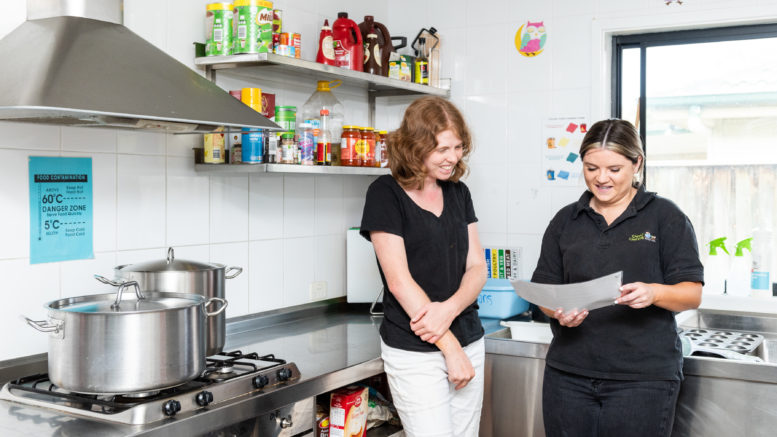 The North Gosford-based star of the Netflix and ABC show, Love on the Spectrum, which sets out to help people with autism find love, has found a different kind of match in Wyoming through scoring herself a job with Cheeky Cherubs Preschool.

Following almost nine years of unemployment, Olivia Tranter now works as a kitchen hand at the preschool, fulfilling her goal of working in childcare, while supporting her dream of being an actress.

Tranter, who lives with autism, was helped into the job by Asuria Employment Service Job Coach, Adin O’Riley.

Despite the first few weeks being difficult, Tranter said she is happy to be in the workforce making money.

“It was pretty difficult at the start, but I had Adin there with me to help with the transition which helped,” Tranter said.

“Adin is a lovely guy.

“He was the one who managed to get me a job after nine years.

“Ever since I was 14, I wanted to be a childcare teacher, and when I was 19, I finally got to study it after I graduated.

“But three-quarters of the way through the year, they kicked me out because of my autism.”

Having spent the first four weeks at work with Olivia helping to prepare food and easing her into the role, O’Riley said he continues to provide support for Tranter through weekly catchups and goal setting.

“When I met Olivia, she had been out of work for nine years, and she thought it was impossible and had almost given up,” O’Riley said.

“So, I thought, no, we are not going to give up, because she wanted a job and wanted paid work.

“I asked her whether she wanted to work, and she said yes.

“But she had just felt really let down about everything and felt like I was just another job provider.

“That really made me think, that was not on – I got in there and did the job with her until she had the confidence to do it herself.”

Cheeky Cherubs Preschool works with children who have additional needs and has been family owned for seven years.

“She is positive in her approach, and she will always ask questions,” Ross-Clark said.

“Olivia said from the beginning that she was not comfortable cooking on a gas top because she struggled to concentrate on multiple things at once.

“So, we decided she (could) use the oven to start, and then make a salad.

“She does not have too much interaction with the children, but when she does, she is perfect.”

With acting a huge part of her life, Tranter said she is glad her new job still lets her pursue her dream.

“I have been part of Options Theatre Company for four years,” Tranter said.

“I just filmed a role for a TV show which will be airing next year.

“I want to be a successful screenwriter and see more people with disabilities in the arts.