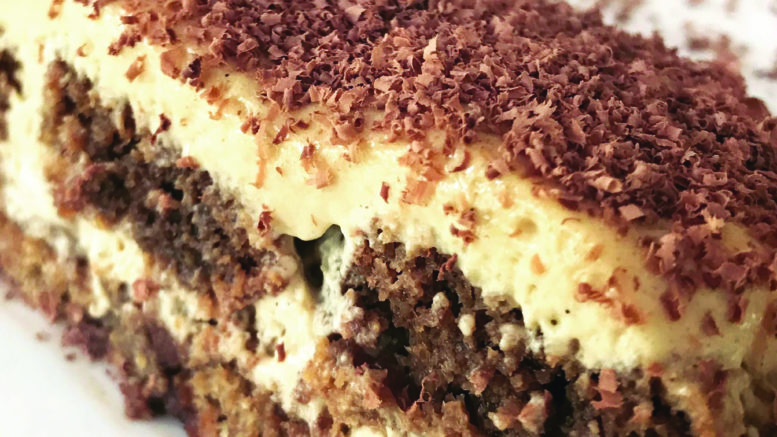 Tiramisu has become one of my favourite desserts for this time of year and is the perfect treat for entertaining. I spent one long Summer experimenting and now have a delicious recipe to share with you. Made the traditional way using raw egg yolks, it’s a wholefood twist on a classic dessert that will both revitalise and nourish.

That’s the good news. The bad news is that you’ll be waiting until next week to get your mitts on the recipe! It’s not a difficult thing to make but it does fall into the ‘labour of love’ category and thus the recipe instructions alone nearly max out my permitted weekly word count. So do stay tuned for that, next week. It will be worth the wait, I assure you!

For now, please allow me to wax lyrical about my all-time favourite dessert.

For such a classic dish, this dessert has a relatively murky history. Believed to have come to life in the Italian town of Treviso, near Venice, it encompasses the flavours of the region – strong espresso, mascarpone, eggs and Marsala. Italians say that tiramisu is a strong aphrodisiac with a saucy history among the brothels of Treviso, where it was used to reinvigorate exhausted clients after their patronisation.

Incidentally, the name tiramisu means energy booster, translating more directly to ‘pick me up’ or ‘lift me up’.  Whatever its origins, with its combined coffee, sugar, alcohol and protein hit, this luscious dessert certainly lives up to its name. In fact, as far as folklore goes, it was this quality that saw tiramisu fed to the sick, as well as mothers, for postpartum nourishment. Please don’t quote me as recommending it for the latter! Although I do encourage new mums to dose up on egg yolks. This is a well-known traditional practice which favours brain development, thanks in part, to the impressive amount of choline they contain. In some parts of rural China, up to ten yolks per day are encouraged.

My ongoing obsession with Tiramisu

I’ve been obsessed with this dessert since a spiritual awakening of sorts, which unfolded at an Italian restaurant in downtown Manhattan for my 28th birthday. I was living in New York at the time and up until that moment, had never been particularly fond of tiramisu. During this meal, the lights went on.

Since then, I’ve eaten it so regularly, that I fancy myself as a bit of a connoisseur. It’s the only dessert we ordered for 3 weeks straight, on our last trip to Italy. (Just as an FYI, gelato falls into the ‘snack’ category. I’m not so outlandish as to pit the two against each other!) All told, we probably averaged one serving of Tiramisu per day. In the noble pursuit of knowledge, of course.

Now, anyone who knows me will attest to the fact that I’m that annoyingly chirpy, glass-half-full type. I don’t grumble about much. However, I do have a rather exhaustive list of pet hates, when it comes to the way this dessert is prepared.

I don’t like the ‘biscuit’ layer too wet, or too dry. And it has to be real cake, not those heavily processed, cardboard-dry savoiardi biscuits! The cream layer mustn’t be too rich and heavy, or worse still, overly fluffy and light. The coffee can’t be too weak. And real, dark chocolate always trumps powdered, as the topping. You get the idea..

My number one pet peeve? That there are raw vegan chefs (and hey, I used to be one, many years ago) calling their dense, nut-based ‘cheesecakes’, tiramisu, just because there’s a splash of coffee in it. Hands off this classic, I say!

My wholefood take on a classic dessert

I remember being sad to have finished the recipe testing for this one. Granted, it may have triggered a temporary relapse into coffee addiction (after 15 years of abstinence), but we had such a nice little routine going in our house for several weeks there. Breakfast, a bit of work around the farm, then a mid-morning slice of healthy tiramisu. It was nourishing on many levels. Self-care for the soul. And I started to cherish and keenly anticipate the ritual. (Might have been the addiction talking.)

I finally worked out why next week’s recipe is such a revelation – it’s kind of show-stopping, actually. One idea that I explore in depth in my online program ‘What To Eat’, is that nutrient dense foods are actually the most flavourful. Our taste buds are in fact, engineered to discern and savour nutritional complexity. That is, at least, once we’ve returned to our intended diet of real food. Freshly picked veggies and greens from mineral-rich soils are worlds apart from the supermarket stuff, for example. Even young children can taste the difference – hence, their unparalleled eagerness to eat homegrown produce!

So, when I first made this tiramisu from our chickens’ freshly laid, organic eggs (an entire dozen of them!), locally grown organic coffee and unrefined rapadura sugar with all its nourishing minerals intact – the result was electric. In a different ballpark than what you might have tried previously, as hard to imagine as that might be for fellow tiramisu lovers.

Naturally, I also dodged the highly processed, pre-packaged savoiardi biscuits and went with a delicious homemade genoise sponge cake. Non-bakers, trust me – it sounds fancy, but it’s not difficult. And even if it fails miserably, you’re drowning it in coffee and cream. So, you can proceed with confidence, knowing that there IS no fail on this occasion!

Well, I’m sorry to leave you hanging here, folks. I hope my ramblings here have whet your appetite for next week’s recipe. It’s one of my favourite desserts to make at this time of year and well worth the effort.