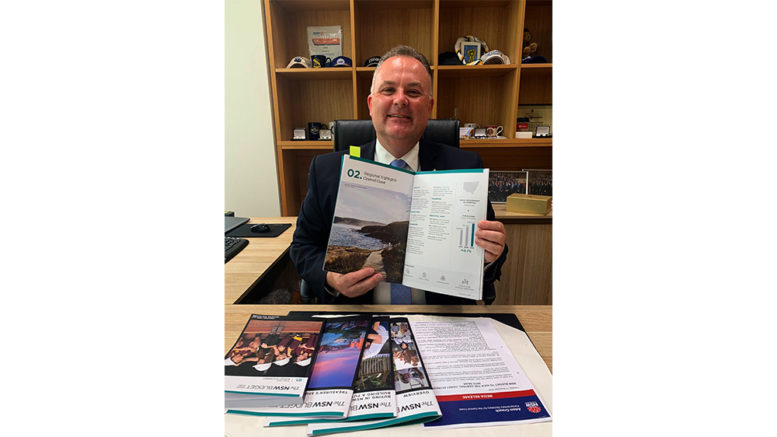 Parliamentary Secretary for the Central Coast, Adam Crouch, looks over the budget papers

Nothing has depressed me more than the front page public housing story of social housing rotting away, neglected and waiting to be cashed in by our State Government (Chronicle, Nov 18).

Also on page one it’s reported that Central Coast Council now has a second $50M loans enabled by this State Government’s “plant” who has been imposed on us over our democratically elected Council representatives.

Turning to pages four and five, there’s the “Public Housing Vacant for Eight Years” story above the regular advertisement for our local Labor representatives.

The story revealed that the NSW Land and Housing Corporation, or NSW Government, spent $3.7M on 302 vacant social housing properties across four electorates on the Central Coast.

Some of these properties have been reported to be empty since 2012, eight long years.

Meanwhile, on page five there’s the story about a $34M upgrade at Tuggerah railway station.

You could build a 10-storey apartment block for less than that with European appliances and two lifts.

The sooner the wise citizens of “Terrible” electorate wake up to their Member of Parliament, Adam Crouch, and his Liberal Party, the better off this state and region will be.

Then there’s the story about the 2020 NSW Budget and $1.5M to continue planning for the $387M duplication of the Central Coast Highway between Bateau Bay and Wamberal.

This has to be more than $40M per kilometre!

The Budget has $15M for a 500-student school, that’s $30,000 per student, and don’t forget the $111.1M for redevelopment construction at Wyong Hospital, but they’re already building a whole new tower block that was commenced in 2019.

Just to make me feel good, it closed with $793,000 to construct new, and upgrade, existing social and affordable housing for Aboriginal communities in Killarney Vale.

That’s $1,586 for 500 people to benefit as part of the $17M for maintenance and upgrades of social housing across the Central Coast which was referred to in the page four story.

On another subject, Paul Pennings (“Quality of road repairs questioned”, p21 Chronicle, Nov 18) should explore more than his street and he will notice that Kingsford Smith Dr and four of its side streets have been revamped with kerb and gutters plus new road surfaces.

Enterprise Dr has been resurfaced in areas after long overdue damaged surfaces but had to wait until this State Government gave us the largest and most inappropriate over-the-top pieces of infrastructure including a massive train shed with large outbuildings visible from the space station as well as a massive $50M concrete bridge, with a complementary roundabout and reduced speed zones all along Enterprise Dr.

Next you’ll be telling us how honoured we all should be for having a guest Administrator arranging multi-million dollar loans with himself, for our benefit and on our behalf, as we have no elected representation for the second time in five years.

This is while Sydney gets $30B – that’s billion – for a metropolitan area that serves up to two-and-a-half million people at most.

How many of our state’s billions are going into underground roads that we, the rate/tax paying public, are funding and then being asked to contribute to their highway robbery as a road user.

How is Wyong and its through pass going for us?

Prejudices need not be repeated