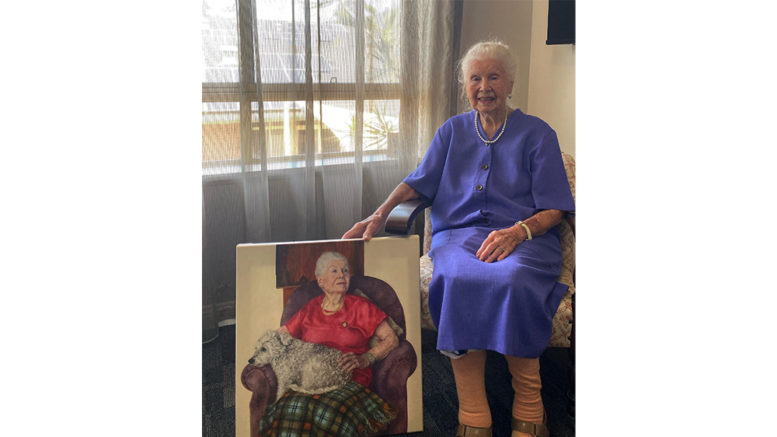 The 99-year old originally grew up in Scotland and moved to Australia with her family in the early 1960s.

Ross, husband Archie and their two sons Irvine and William, travelled the world frequently, due to Archie’s career with Scotland Yard.

For the past 30 years, Ross has lived at Kariong.

“Over the course of my life I’ve had the pleasure of visiting more countries than I can count, but I chose to settle down on the NSW Central Coast; I think that says it all,” she said.

After documenting her stories and travels from across the world, Ross’s passion for history and writing came to fruition in her 80s when she published her first novel, Vaila’s Capri, in 2010.

“Two of my favourite destinations were Africa and the Isle of Capri, both of which feature quite significantly in the book,” Ross said.

“I didn’t realise it at the time, but through my journal keeping, I had essentially been writing the basis for Vaila’s Capri my entire life.

“Revisiting those journals whilst writing the novel brought me such joy.

“All those memories and emotions tied to the beautiful places and cultures came flooding back; I was able to relive those moments over again.”

After the launch of her book, Ross was approached by the then Gosford City Council to participate in a promotional video showcasing prominent people on the Central Coast.

Young Artist Janelle Thomas asked Ross to sit for a portrait painting, which was entered into the Archibald Prize.

“It was a wonderful experience – both for me and my dog at the time, Kirsty, who wouldn’t be outdone and immediately hopped on to my lap to be included in the portrait,” Ross said.

The painting, unfortunately, didn’t win the Archibald Prize but did take out the Kilgour Prize in 2015.

It now hangs on her studio wall.

Ross is happy to still be living on the Central Coast but is feeling confident with the extra support and help that Peninsula Villages provides.

Settling into her new home at Don Leggett House, Ross is now focusing on her biography which has already been picked up by a publishing house.

Can you meet the starjump challenge?

Beds go from beach to Beirut