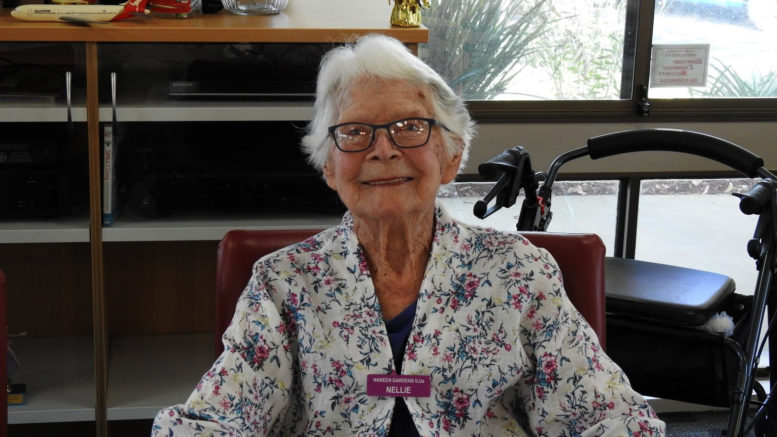 While it has been a few weeks since Nellie Langham’s 100th birthday, the Bateau Bay resident is still enjoying that birthday bliss, following a week of centenarian celebrations.

With COVID-19 casting its shadow over the festivities, family, friends and her fellow residents at Uniting Nareen Gardens decided to ring in Nellie’s triple digits with a triple celebration.

The first celebration was with family members, with one daughter, four grandchildren and five great grandchildren coming from near and far to celebrate their matriarch’s special day.

This was followed by two separate birthday parties presented by staff and residents.

Born to May and Charles Proctor, alongside twin sister Mary, on November 16, 1920, Nellie’s daughter, Margaret Marr, has shared some of her mother’s life story.

“Sharing her birthday with the inauguration of Qantas Airlines, mum spent her early childhood at Pebbly Beach before the family moved to Five Dock and Boronia Park

“After dad served in WWII, they made their home at Kingsgrove and had two daughters, myself and Dianne.

“Dad was a builder and as areas opened up, his work took us to Beecroft.

“They retired to Bli Bli in Queensland where dad unfortunately passed away in 1978, with mum returning to the Central Coast to be nearer to family,” Marr said.

“Mum was a very determined and independent lady who has involved herself in many activities including lawn bowls, indoor bowls, dancing, volunteering, table tennis, darts, reading, crosswords, cards, ‘upwords’ and of course knitting, which she still does to this day, making squares to be sewn together for blankets for the underprivileged.

“She also has done a lot for her church over the years and is one to make you feel most welcome wherever you meet her,” Marr said.