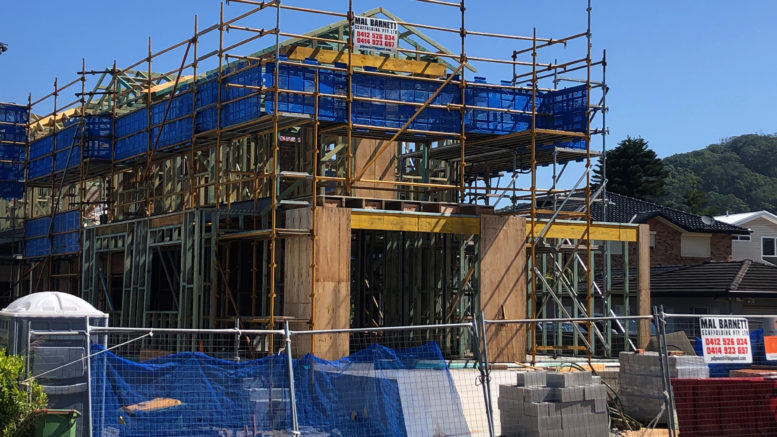 More growth corridors around Woy Woy, Umina and Ettalong could be the answer to a growing imbalance between housing supply and demand on the Peninsula, according to Urban Development Institute of Australia (UDIA) Central Coast Chapter Chair, Caine King,

King told a luncheon meeting on November 17 that the imbalance was pushing house prices up all over the region.

“The migration from Sydney is so strong, which we’ve encouraged for a very long time and we shouldn’t be discouraging that, but the housing stock isn’t there.

“So, what we have now is that the affordable Central Coast that has long been promoted, is not so affordable.

“On top of that there’s also the rental market which is at an all-time low.”

King said housing completions were high, sales were strong but building new housing was being delayed and deferred through the approval process, therefore, tying up the marketplace and reducing prospects for jobs through growth.

It is estimated the Coast needs 2300 new homes a year to keep up with demand.

“Some amazing opportunities are coming up on the Peninsula in the very near future and we are looking fairly regularly at ways to activate that area,” King said.

“There are really good advantages there and, yes, there are flooding issues and some other structural issues but they can be overcome.

“The Peninsula hasn’t changed but new people moving in are bringing change with them and they want diversity in housing.

“You have to expect some growth and there’s town centres there already that can grow.

“We should be developing growth corridors and town centre hubs such as Woy Woy, Umina and Ettalong with units, townhouses, duplexes and fanning out to residential areas with single dwellings.

“Just look at Ettalong; there was nothing there until we worked with Council to trigger development along Ettalong, and now look at it.

“That was one of the initiatives of Council, so you have to give them credit on that.

“There’s a new unit development going up and lots of other people are investing in the area and it’s doing very well.”

King said while there had been a steep rise in housing completions, there was a massive drop in development application approvals.

“Housing projects are being delayed, deferred and taking too long for local government to make a decision,” he said.

“Industry and government at all levels need to work together to find the balance to ensure we are protecting the environment but also providing housing and new jobs that we need on the Coast.”

King said delays by Central Coast Council in adopting a Local Environment Plan (LEP) was not inspiring confidence in developers looking to invest in the region.

“The Central Coast has been planned to death yet it’s the LEP that is instrumental for development proposals to give clarity of direction and consistency.

“It’s baffling why it is taking so long and unfortunately it’s been roadblocked in the Council room three times.

“We need the LEP, I can’t stress that enough and we’ll be asking the Administrator as a priority.”