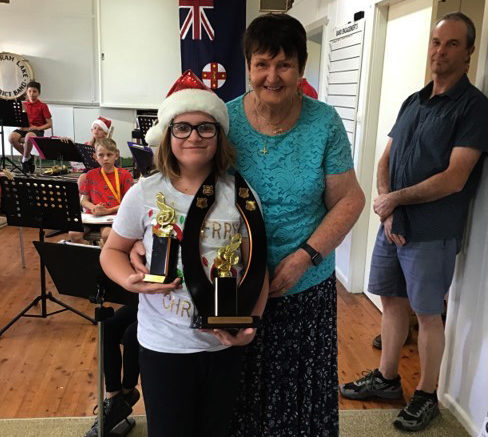 The talent and dedication of the members of Tuggerah Lakes Junior Concert Band were put on full display recently, when the Band held its annual end of year concert and presentation despite the considerable impact that the pandemic had on the Band’s preparations for this year’s event.

A highlight of the concert was the inaugural presentation of the Midge Beach Award for Dedication and Commitment, in memory of the recent passing of Ron ‘Midge’ Beach, an outstanding long time player, Administrator and Treasurer, who is dearly missed by the Band and the community.

Ron’s wife Margaret, also a Life Member of the Band, congratulated and presented the award to cornet player, Maxine Maiden.

Margaret was delighted by the Junior Band’s performance.