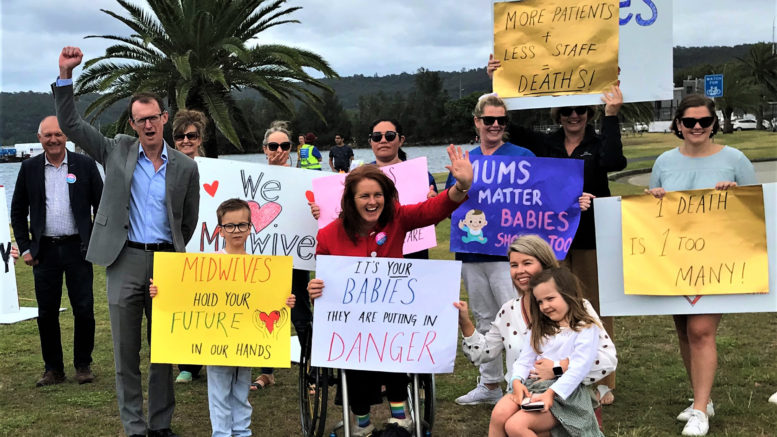 With the maternity unit at Wyong Hospital to remain closed until at least early next year, Central Coast Labor MPs rallied with members of the NSW Nursing and Midwifery Association on December 11 protesting what they claim are planned cuts to maternity services at Gosford Hospital.

Central Coast Local Health District confirmed that the Wyong unit was closed earlier this year in light of a COVID-19 surge and reopening it would not be considered before next year.

“The maternity unit at Wyong will re-open when COVID-19 surge requirements are no longer required,” Montague said.

With Gosford now the only public hospital on the Coast offering a maternity unit, MPs and the Association claim that the maternity bed base and midwifery staffing at Gosford are set to be cut.

However, the District says bed numbers and staffing in the maternity unit are constantly shuffled to meet demand and there will be no cuts as such.

The Association says it understands that dedicated maternity beds at Gosford will be cut from 28 to 24, even though it says there is often in excess of 30 beds being used by women and babies on a daily basis.

The ward will also lose one 12-hour midwifery shift per day, it says.

Labor MPs say the latest cuts follow a recent cessation of the continuity of care program and the 2019 cancellation of two full time positions from the Midwifery Group Practice service, which is popular among low risk pregnant mothers on the Central Coast.

Wyong MP, David Harris, said it was essential that safety was the top priority when making calls about maternity services.

“We cannot accept that women and babies will be put at risk for the sake of saving the government a few dollars,” he said.

“The Inquiry into the deaths of five newborns at Blacktown Hospital in the past two years has highlighted a lack of staffing as a key issue, so we know the life threatening implications of having under staffed maternity wards,” Swansea MP, Yasmin Catley said.

“These numbers might not sound overwhelming, but we have to remember that each birth involves two patients, a mother and a baby, so to reduce the number of midwives significantly increases the patient load for other midwives,” The Entrance MP, David Mehan said.

“Cuts to staffing and resources has a negative effect on families,” he said.

“Current staffing of the maternity service at Gosford Hospital exceeds the requirements set out in the Award,” he said.

“Additional staffing is provided where there is particularly high demand or additional complexity.

“This ensures a safe and supportive environment for expectant women.

“A review of demand in Gosford Hospital’s maternity inpatient unit over the past two years identified that on average, 20 women per day were staying in the unit.

“The employment of current midwifery staff will not be affected.

“There will not be an increase in the workloads of midwives.

“Staffing is increased as demand increases.

“The safety and wellbeing of women and their babies is our number one priority, and we maintain safe staffing levels at all times to maintain a high standard of care.

“The District continues to provide continuity of care programs for expectant women through its Midwifery Group Practice, Aboriginal Maternal and Infant health, and complex care programs.”

However, the Union says the decision to make cuts to the maternity unit are premature, given the current routine review is yet to conclude.