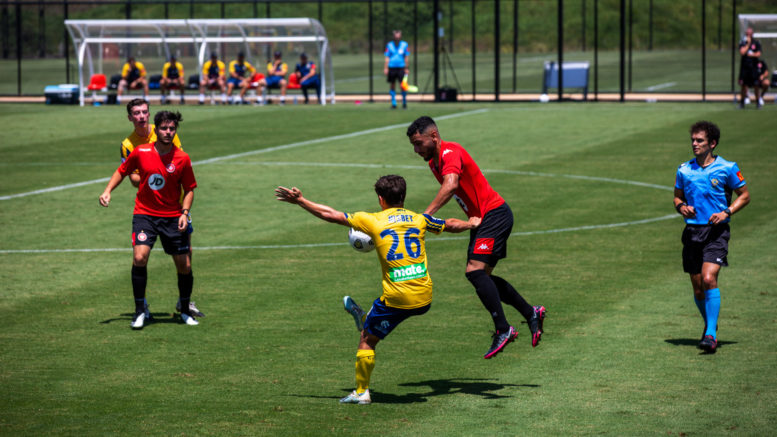 A-League preparations continued for Alen Stajcic and his Central Coast Mariners on November 27, with a pre-season trial against Western Sydney Wanderers at the Wanderers’ Centre of Excellence.

A quiet opening 10 minutes saw neither side threaten, before Alou Kuol dragged a shot just wide from Dan Bouman’s cross, and saw another chance escape him moments later from Ziggy Gordon’s whipped pass.

The Mariners held sway early and another chance fell to Kuol, only for Oliver Kalac to deny him down low, but Stajcic’s side took the lead seven minutes before the break.

A free kick on the left was not cleared and fell to Nahuel Bonada, who swept it inside the near post to give the Mariners a half-time advantage.

It took just six minutes of the second half for the lead to be doubled, when Gianni Stensness found space in the area from Jack Clisby’s corner and fired a header past Kalac.

Nicolai Muller pulled a goal back for the hosts soon after, and Stajcic made a couple of changes for match fitness as Adam Pearce and Damien Tsekenis replaced Mark Birighitti and Kuol.

Josh Nisbet fired a header straight at the keeper 20 minutes into the half, and Wanderers equalised soon after through Nectarios Triantis’ close range header.

Matt Hatch replaced Clisby as he picked up some valuable game time, and there were few further chances as the initial 90 minutes ended 2-2.

A swathe of changes were made for an additional 30 minutes of game time, with plenty of Mariners’ youth getting important experience.

There were numerous chances denied for the Mariners, but Harry McCarthy found time and space with just over 10 minutes to go, to curl an effort past the goalkeeper from long range and put the visitors ahead long enough to claim victory 3-2.

Post-game, Stajcic said he was impressed with what he saw and that he was glad for the opportunity to continue preparations a month out from the season start.

“This morning was a good hit out and a valuable opportunity to get minutes in our boys’ legs against A-League opposition,” he said.

“There’s positives to take from this outing and we’ll continue to work hard and push towards our season opener on New Year’s Eve.”

Carols on the Coast returns to Central Coast Stadium