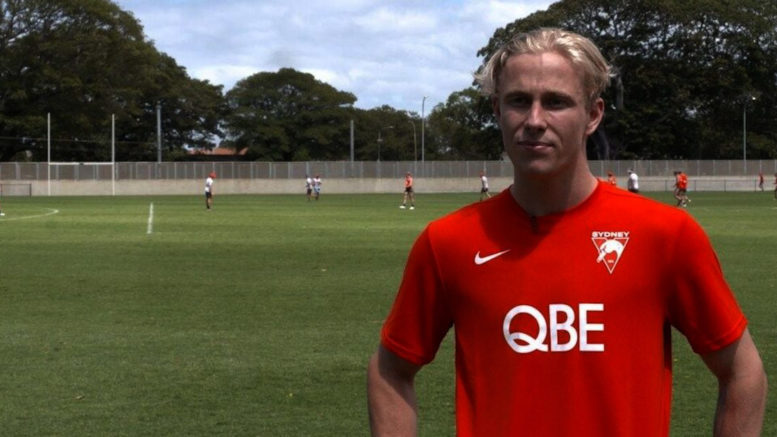 The Coast’s own Marc Sheather is officially a Sydney Swan.

The utility allrounder from Forresters Beach signed with the club after being drafted as a Category B Rookie on December 10.

It’s the realisation of close to a decade’s worth of hard work and sacrifice for the former Killarney Vale Bomber’s junior, who’s dreamed of playing for the Swans since he was 12 years old.

“In Year 6, I wrote my future self a letter about how I was going to play for the Swans, so this is a genuine dream come true,” Sheather said.

Having also played with the Swans Academy from the Under 12s through to the Under 18s, the signing has felt like a long time coming for Sheather, who got the call under less than ideal circumstances.

“I was actually in a dentist’s chair when the call came through and basically had a mouthful of putty when I got the best news of my life.

“After that it was pretty hard to sit through my cleaning.

“I just wanted to tell everyone,” Sheather said.

It was also the perfect end to an incredibly hard year for the 18-year-old who had to juggle his draft ambitions and his HSC in the shadow of COVID-19.

“COVID was a massive obstacle, but I’ve always been pretty determined, and I had a great support network which really allowed me to focus on my footy and prep for the draft.”

With the new goal of making his debut in 2021, the fledgling Swan knows that the real hard work starts now, but for the time being, he’s enjoying the fruits of his labour.

“Right now, we’re heading into the end of year break, but my plan as a first year player is to just work my butt off, impress my coaches and earn the respect of my teammates.

“It’s not common for a rookie to run out in their first year, but if you work hard enough, anything is possible,” Sheather said.

And with such a bright future ahead of him, Sheather said that he’d be spending his downtime celebrating with the people who helped him get to this point.

“I’m where I am because of my family and all the people who’ve supported me.

“Mum and Dad especially have sacrificed so much, and my girlfriend, Alyssa, has been by my side through it all this year.

“I really can’t thank them and all my coaches at the Academy enough.