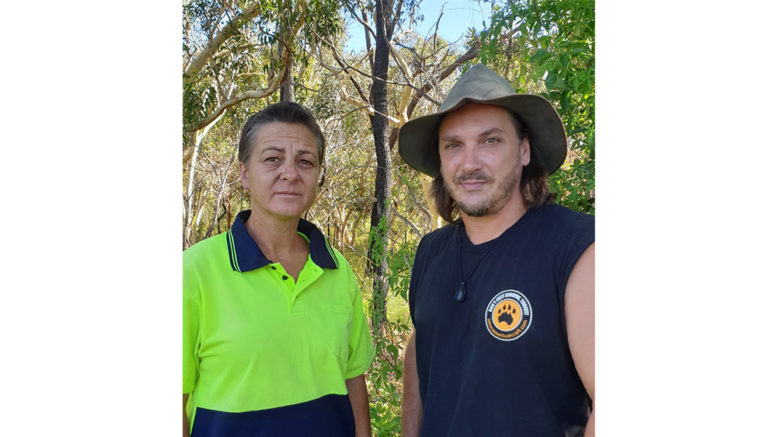 Jake Cassar and Tracey Howie at the proposed development site

With a controversial 70-home housing development proposed by Darkinjung Local Aboriginal Land Council (DLALC) at Kariong still under consideration by the NSW Planning Department, indigenous and non-indigenous community groups have joined forces to oppose it.

The proposed development, adjacent to environmentally sensitive and culturally significant land on Woy Woy Rd, was determined by the Joint Regional Planning Panel to have strategic and site-specific merit in July.

But latest advice from Planning Department Senior Planning Officer, Strategic Planning, Andrew Hill, is that there are no updates on the status of the proposal.

Coast Environmental Alliance (CEA) spokesperson, Jake Cassar, said the discovery of a culturally significant site on the land should be a “gamechanger” in the consideration of the proposal.

He said there has already been community uproar over alleged illegal clearing and an arson attack on the site earlier in the year.

“To date, no-one has been found responsible for the illegal clearing, and the arsonist was found guilty, but escaped a custodial sentence,” Cassar said.

A Central Coast Council spokesperson said Council’s compliance team was in the process of investigating the removal of native vegetation on the site.

“I was shocked to recently learn that the State Government is allowing this development to proceed to the next stage based on surveys that occurred after a substantial amount of the land had been bulldozed,” Cassar said.

“Our group was told by the Department of Planning, Industry and Environment (DPIE) that an Aboriginal site was discovered underneath bulldozed trees during the investigation into the alleged illegal clearing, but the State Government seems to be willing to allow this to progress based on the old reports that don’t include this uncovered Aboriginal site.”

Tracey Howie, from Guringai Tribal Link, said the group believes any development of the area would encourage excessive use of the adjoining Bambara Sacred Lands and surrounding landscape, by potential residents, their visitors, their children and their pets.

“We also believe that once one portion is approved for development, it’s never long before more rezoning is applied for and construction continues and encroaches closer to Bambara Sacred Lands,” Howie said.

“Now that we know there is indeed a site there, we need to do everything we can to preserve it.”

Howie said the entire area is still used today for the education of Aboriginal and non-Aboriginal youth, where they are taught about bush foods, tracking, and how to care for the land.

“Our cultural heritage and Country have been directly impacted at a rapid rate due to the massive influx of developments across the Central Coast” she said.

“The State Government could purchase the land from DLALC and amalgamate it into the National Park that surrounds the majority of the site.”

Renee Sales said her ancestors, the Darkinoong, shared the sacred places with the Guringai people.

“The Darkinoong plan on working with the Guringai and everyone in the community who has fought tirelessly to defend Kariong Sacred Lands,” she said.

“Together we must find a way to protect this land for our future generations.”

“Our stories are engraved in the sandstone, carved in the trees, and painted on the walls of the caves,” she said.

The groups are encouraging residents to write to local State MPs voicing their concerns.