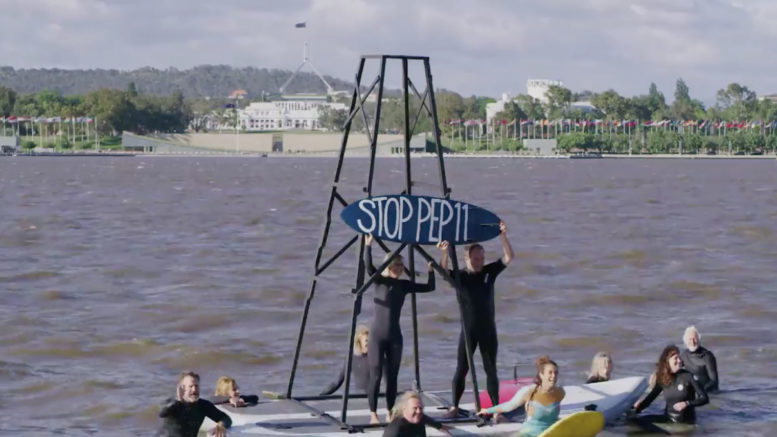 The Save Our Coast delegation en route to Canberra

A Save Our Coast (SOC) delegation to Parliament House in Canberra on Monday, December 7, presented thousands of heartfelt comments and signatures in opposition to Petroleum Exploration Permit (PEP)11.

Save Our Coast has been campaigning against PEP11 since February 2018, and collated 77,000 signatures on petitions and thousands of comments from community members expressing concern and outrage at the plan to blast and drill for gas off the Central Coast and Newcastle.

An application to drill for gas and extend the PEP11 title, which is due to expire in February 2021, is currently before Minister for Resources, Water and Northern Australia, Keith Pitt.

Founder of Save Our Coast, Dr Natasha Deen, said that almost all coastal MPs, including Liberal, Labor and Independent MPs had strongly opposed PEP11, except for Central Coast’s Liberal Member for Robertson, Lucy Wicks, who had not yet responded to requests for a meeting with Save Our Coast.

“We are proud to have informed and inspired the community and provided a platform for a chorus of diverse community voices opposing the shocking plan to industrialise our beautiful coast and we are proud to bring these voices to Parliament,” she said.

“The flawed and devastating plan that is PEP11 that risks our coastal ecosystem and way of life has naturally been met with distress and outrage from coastal communities, with 77,000 signatures on our petitions, thousands attending events, and 23,000 actions taken as part of our current campaign STOP PEP11.

“We honour each and every one of the 77,000 voices that have united with us to Save Our Coast and we are delighted to have the support of MPs from across the political divide, and have them stand with us to implore Minister, Keith Pitt, to draw a line under the flawed and risky PEP11 project once and for all,” Dr Deen said.

Labor MPs along the Central Coast and Newcastle coastline joined a cross-party contingent in Canberra on Monday to convince the Morrison Government to reject any extension of the PEP11 oil and gas exploration permit along the NSW Coast.

McBride said that her community was united against the extension of the PEP11 permit, which is currently being decided by the Federal and State Liberal Governments.

“Locals are concerned up and down the coast that if this extension is approved, our communities will be powerless to stop oil and gas rigs being set up in our precious waters,” she said.

“Sadly, the decision on PEP11 won’t be made on the Central Coast.

“If we’re going to fight off this senseless project, we’ve got to make the case here in Canberra, that’s what today is all about.”

McBride said Parliamentarians from across the political spectrum welcomed a delegation of surfers, environmentalists and concerned coastal residents to Parliament House.

“I’m standing up for our community in Canberra and saying no to PEP11, which poses a real threat to our marine environment, our coastline and our way of life,” McBride said.

“I’m also doing everything I can to convince my Parliamentary colleagues to oppose the extension of the PEP11 permit as a matter of urgency.”

McBride spoke later in Parliament saying that her office had already received close to 800 emails, phone calls and petitions from locals who are concerned about PEP11.

Parliament doesn’t need to wait for Minister to quash PEP11

LNP divided on future of PEP11