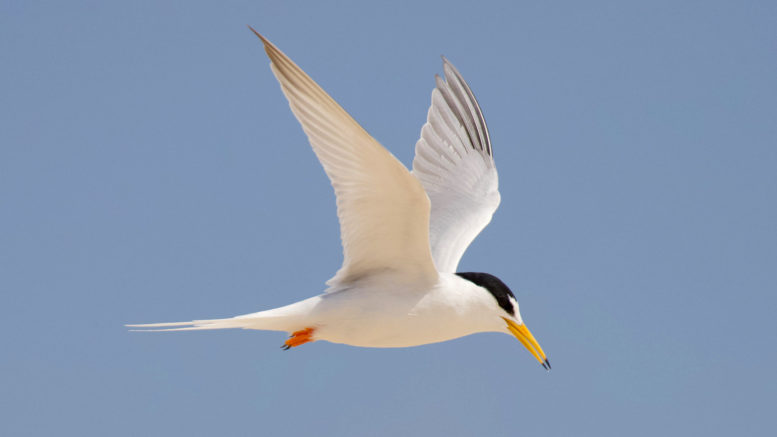 A year on from a callous attack, the North Entrance Little Tern colony is thriving.

On December 1, 2019, the community was shocked by reports that three people had entered the colony’s Karagi Point nesting grounds to harass the endangered birds, destroying several nests and eggs in the process.

With parent birds notorious for abandoning eggs and chicks when stressed or threatened, grave concerns were held for the health of the colony following the attack.

But thankfully, disruption appears to have been minimal, with Central Coast Birding Group (CCBG) reporting a strong start to this year’s breeding season.

According to CCBG spokesperson, Allan Benson, at least 120 Little Terns had been counted since the birds began returning at the beginning of September, a figure he said was a significant increase from last year.

“We are seeing a lot more Little Terns at North Entrance than we usually would and with around 70 exhibiting breeding plumage, we could be seeing double the number of hatchlings that we had last year,” Benson said.

With large numbers of nests already being recorded, Benson is optimistic that the colony could also see an above average number of fledglings this season.

“The latest counts put the number of nests at 58 with four fledglings, which is very early for this time of year, but that’s actually a good thing, as it means we’ll likely see a lot of fully fledged birds around Christmas and New Year’s, well ahead of the summer tourism peak when the colony is most at risk of human interference.”

Also working in the colony’s favour has been increased protections from Central Coast Council.

“Council has put more substantial fencing up around the nesting ground to ensure that the birds are not disturbed and they’ve also upped their monitoring of the colony.

“As CCBG spokesman, I can confidently say that council has done a fantastic job of protecting the Little Terns this year.”

A spokesperson for council confirmed that a greater effort had been made to protect the colony this breeding season.

“This year, in consultation with NSW National Parks and Wildlife Service, Central Coast Council has increased and improved signage for better visibility from land and from water, and has installed more robust temporary fencing around the Little Terns’ nesting area, which also gives the endangered birds a wider nesting area and an increased buffer from human related disturbances,” the spokesperson said.

“Council also strategically set up its dredging equipment in a way that reduced access and protected the nesting area at a crucial time for the birds, and we are delighted to see that we are on track for a record breaking number of successful Little Terns’ hatching and fledging.

“State wide numbers show that nesting pairs are declining by about 3 percent per year, which makes high performing nesting sites, such as Karagi Point, all the more important for the species’ long-term survival.”

The spokesperson also confirmed that qualified ecologists would be monitoring the colony on a weekly basis until all hatchlings are fledged.

Council Rangers have also added the nesting grounds to their routine patrols with fines to apply to anyone found disturbing the birds.

“Council thanks the community for being respectful of the nesting sites and we continue to urge them to take care, obey the temporary fencing and signage, pick up their litter so it doesn’t attract predators, minimise loud noise, and keep pets and animals, including cats and dogs, away from the area.

“We have found that there is a high level of community interest in the Little Terns, and so in December and January, Council and NSW National Parks and Wildlife Service have also planned to hold education sessions where the community will be able to learn more and speak directly with our experts,” the spokesperson said.