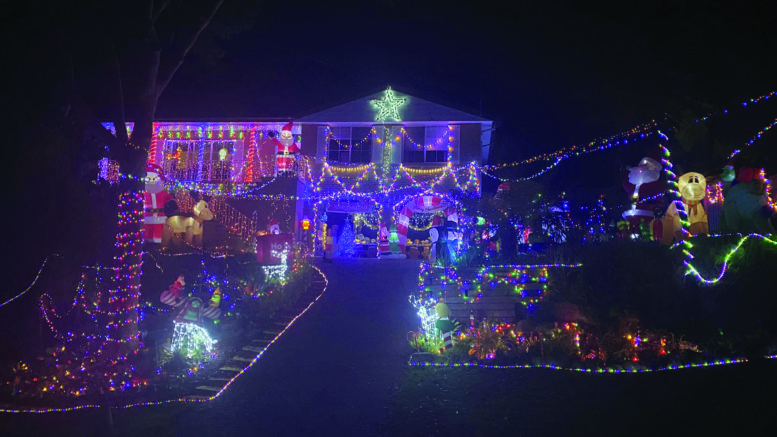 The lightshow is raising funds for Beyond Blue

A house in Umina Beach has brought festive cheer to locals with a spectacular lightshow that is free to all each night of the week.

The display, on Castle Circuit, Umina, is organised and ran by mother and son duo Sue and Nathan Woodward.

Nathan said the duo started putting the lights up in September after plans to expand and promote the lightshow commenced earlier this year.

“As soon as we took last year’s lights down in January, I was already planning Santa photos and ideas for this year,” Nathan said.

“It’s a full year thing – realistically we never stop thinking about it.

“Every year I always go bigger, always have, always will be – we just love it.”

The exhibit features a variety of lights, snow machines, a walk-through parade with a mini Christmas village display, and weekend visits from Santa and Mrs Claus … with a little help from Nathan and his friend.

Nathan said he and his mother have been doing the lightshows for almost 15 years, but sadly not many people would come and see.

“Up until two years ago we would have next to no-one come and have a look,” Nathan added.

“We have started to promote it now.

“I love the garage – it’s so magical and takes the display to a whole new level.”

Donation buckets have also been set up around the property to help raise much-needed funds for mental health charity, Beyond Blue.

Nathan has also created a unique QR code which directly links to the fundraising page and can be found attached to each candy cane passers-by receive.

He said he had originally set the target amount at $500 but has been pleasantly surprised to have raised nearly $650 so far, with the target now bumped to $1000 in time for Christmas.

“We have never raised money or collected donations in the past but about six weeks ago I lost a really good friend of mine to suicide,” Nathan said.

“It’s why we’ve chosen Beyond Blue to donate to because it focuses on mental health.

“It’s so important – there are so many people struggling right now.”

Locals can visit the festive display each night from 7pm till approximately 10:30pm, with visits from Santa and Mrs Claus on Friday and Saturday nights, and on Christmas Eve.

For those unable to attend the lightshow, donations to Nathan’s page can be made at Beyond Blue’s fundraising page under Castle Circuit Christmas Lights #forCaleb.

Time to give back, say Salvos