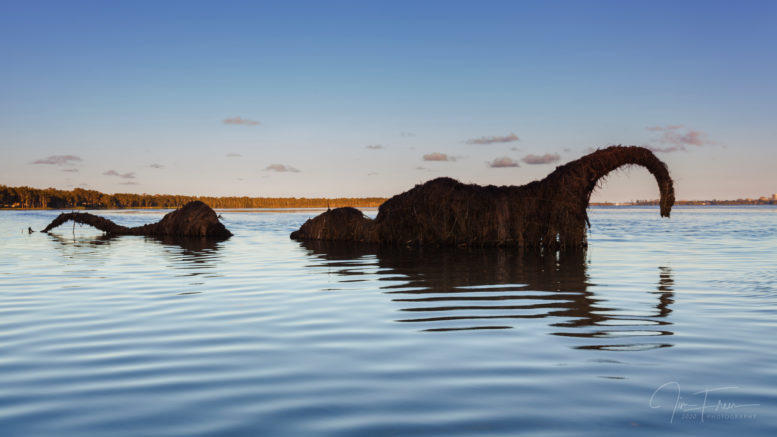 Pete Rush’s Nessie in all her glory PHOTO: Tim Freer

Celebrated local artist, Pete Rush, has made good on a promise to bring a legend to life, with his take on the Loch Ness Monster now mystifying onlookers at Chittaway Bay.

Rush’s homage to the elusive lady of the lake came about after he dismantled his giant creation, Lantanasaur, with the sauropod’s neck and tail repurposed to make Nessie, along with a new body piece made from sea grass.

Speaking to the Chronicle, Rush confirmed that he made the decision to take Lantanasaur apart after a complaint was posted online from a community member and stressed that no formal complaint had been made to Central Coast Council.

“Basically, the story is that a woman complained online that her kid wanted to climb Lantanasaur and that worried me a bit, so I decided rather than risk it that I’d just take it down and move it into the lake and that’s how I got the idea for Nessie.

“No complaint was made to council and no one from council made me take the piece down,” Rush explained.

Rush said he felt the need to clear the air after the dismantling caused widespread community outrage, but the artist believes the demise of his ambitious dino is probably for the best.

“In all honesty, I think I probably went too big with Lantanasaur, so I don’t want there to be all this outrage about it.

“It is disappointing that lots of kids and families missed out on seeing it, but those same families can now enjoy Nessie and people keep turning up, so I think it worked out in the end.

“I’m certainly not upset about it,” Rush said.

Located in waters off Lions Park, Nessie has also spurred Rush on to his next project, a Thylacoleo carnifex, more commonly known as the marsupial lion.

One of the apex predators of the Pleistocene age, the marsupial lion was the largest carnivorous mammal known to have ever existed in Australia, with Rush’s inspiration for the extinct wonder beast coming from previous work and Nessie’s neighbour, Diprotodon.

Believed to be one of the marsupial lions’ main food sources, Rush is now setting up an epic prey versus predator battle between the Diprotodon and Thylacoleo carnifex, with the latter to be installed on top of the former and staged as if it’s attacking it.

“When I started working on Nessie the lake was going down and I was thinking she wasn’t going to work and I needed to do something else, and that’s when the idea for the marsupial lion popped into my head.

“I remembered it from my research into Diprotodon and thought to myself wouldn’t it be cool to bring that scene to life,” Rush said.

Essentially a giant quoll crossed with a lion, curious locals should be able to catch Thylacoleo carnifex and the plight of the Diprotodon by the time of this article’s publication.

There’s much more to being an artist than just painting