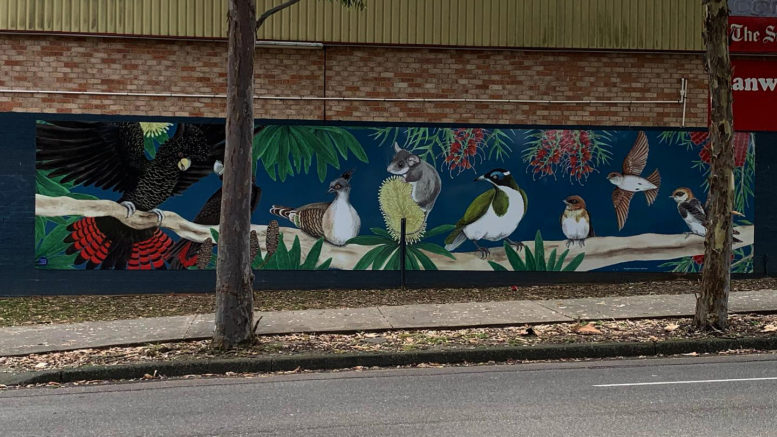 A new graffiti busting mural that celebrates the Coast’s natural beauty has been unveiled at Kanwal.

Hanging proudly along the Walker Ave side of Kanwal Village Shops, the Neighbourhood Natives mural was installed to enhance the streetscape and was a collaborative project between locals, businesses, community groups and Council.

Long-time resident of Walker Ave, Neil Bevege, kickstarted the project after becoming fed up with rampant tagging in the area, with the wall in question a particular eyesore.

Coming up with the idea to fight art with art, Bevege approached the shopping complex owner to gauge interest in a mural.

After getting approval, Bevege took his mural idea to friend and artist, Margot Hislop.

Once she was on board, he applied to Central Coast Council for grant funding to bring the project to life.

What followed was a lengthy application process to hammer out the intricacies of using public funding on a private land project.

But after bringing in Budgewoi Beach Dune Care as the sponsoring incorporated body and Charmhaven’s Impressive Print Solutions as the manufacturer, things fell into place.

“There was a lot of backwards and forwards with Council and a lot of paperwork, but eventually we got the grant and maintenance agreement sorted and Margot was able to get to work,” Bevege said.

“All my works relate to the beautiful and wonderful natural environment we have here on the Coast, so when Neil approached me about designing the mural, I knew that I wanted to highlight species local to this area, because people don’t often realise what amazing plants and animals they’ve got living in their own backyards,” Hislop said.

Aside from beautifying the neighbourhood, the 12 metre mural is also protected with a special anti-graffiti coating and it is hoped that this feature will help significantly reduce vandalism in the area.

“We know this isn’t going to stop people from attempting to graffiti, but a blank wall is a blank canvas to taggers, so by putting the mural up, it is hoped that taggers will be deterred, and they do generally tend to respect other artists’ works and leave them alone,” Hislop explained.

For the time being, that appears to ring true, with the mural having remained undefaced since it was erected in mid-November.

With Council deeming the collaborative project a success, it is now hoped that similar graffiti reducing public art projects could become common around the Coast.

“This is the first project of this nature where Council has worked with the applicants to deliver public art on a private asset, and Council is very happy with the outcome,” said Council’s Unit Manager Community Partnerships, Glenn Cannard.

According to Cannard, a similar project is in the pipeline for Avoca, with Council now hoping to develop a grants’ package tailored for similar community driven public art projects.

“The updated Graffiti Management Strategy is going to Council this month and within that you’ll find the four focus areas that the community has told Council it wants these types of projects in.

“They want initiatives that beautify the area, provide work for local artists and counter graffiti.

“Council has noted that other buildings that Council has put murals on have had their maintenance and upkeep costs in relation to vandalism lowered substantially, so we know this works, and Council is keen to work with the community to make more of these projects happen,” Cannard said.