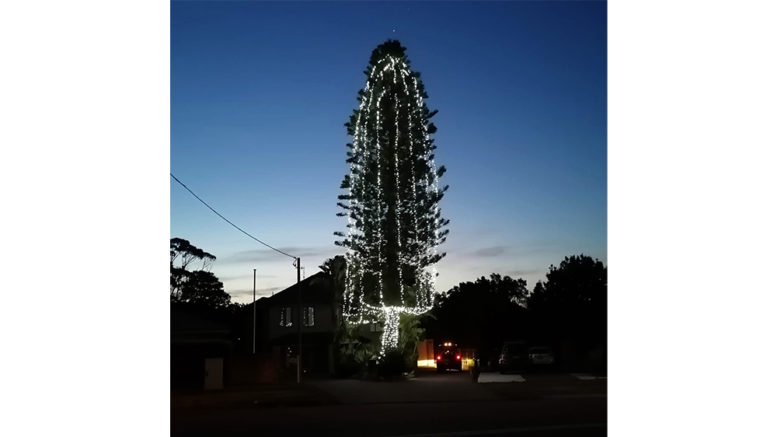 As Christmas lights sparkle to life across the Coast, a new display at Bateau Bay is bringing a twinkle to locals’ eyes.

Adorned with almost 6,000 LED lights, a 20m tall pine tree on Marlowe Rd has been transformed into a glittering monolith of a Christmas Tree.

Owned by Christine Hopper, the luminous display was her way of spreading some Christmas cheer.

“I’ve lived here for 36 years and always wanted to do something with the tree, and after everything that’s gone on this year, I thought this is definitely the year to do it.

“It’s my family’s way of bringing a bit of joy and happiness to the people this Christmas,” Hopper said.

Blake Laurie and his team from Coasties Electrical installed the lights, with the sparky admitting it was one his most unusual jobs.

“When I got the call, I thought we’d be dealing with a six or seven metre tree, so I was a bit taken aback, but after four weeks of planning we had a game plan,” Laurie explained.

“Ryan’s a mate of mine, so we had him go up the tree and drop the lights down for us.

“After that it was just a matter of securing the wiring and putting it all together.

“All up it took about seven hours, but the end result was worth it,” Laurie said.

And Hopper and her family will have to take his word for it.

“We’ve actually been away, so we’ve only seen it in pictures and are very excited to see it in person,” she said.

Once home, Hopper said the family plan to continue transforming the tree into the Coast’s biggest Christmas Tree, with more decorations to come.

“We actually wanted to get a light up star put on top as well, but we didn’t know if that would work.

“Our aim is to be able to light it up year round.

“We want the tree to be this subtle way of uplifting spirits, because after the past 12 months I think everyone needs something to make them feel a little brighter.