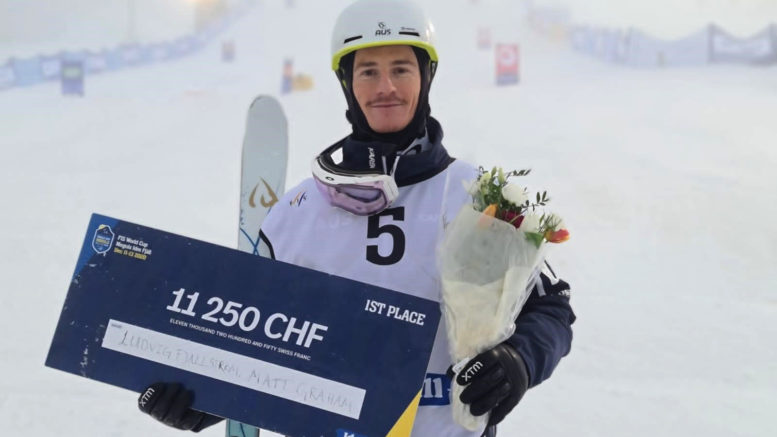 The 2018 Olympic silver medallist had a number of impressive head to head “dual” races on the Idre course to reach the last pair of the day, before fog rolled in and forced the event to be called off due to low visibility.

Graham was set to dual home-town Swedish skier Ludvig Fjallstrom for the gold, but with the final phase of the event unable to take place, both were awarded the win.

“I had some very challenging duals, including coming up against my teammate Brodie Summers in the first round.

“He skied really well all week which gave him a well-deserved silver medal in the single moguls event.

“My tactics (were) to push hard out of the gate and go as big as possible on the top jump.

“This course is quite fast and easy compared to most World Cup courses, so you just had to land the top jump and charge the middle section as fast as possible.

“The final four men were all pretty relaxed and chilled at the top of the course waiting for the fog to hopefully clear.

“I was just remaining activated and ready to go, because we would not have gotten much warning if the fog cleared.

“It would have been fun to be able to finish the event and see how things would have turned out, but you can’t control the weather.

“I was happy to share the top step of the podium with Ludvig.

“It is his first World Cup win, and he is a good mate of mine as we have been competing on the World Cup tour together for 10 years now.”

For Graham, the result marks the 16th major medal of his career (3 gold, 6 silver, 7 bronze) and his first World Cup win since January 2017.

After three events, Graham now sits in third place on the World Cup standings, with teammate Brodie Summers in fifth.

The mogul skiing athletes will now return to Ruka, Finland, site of the first World Cup event of the season, as their training base before competition resumes in late January.