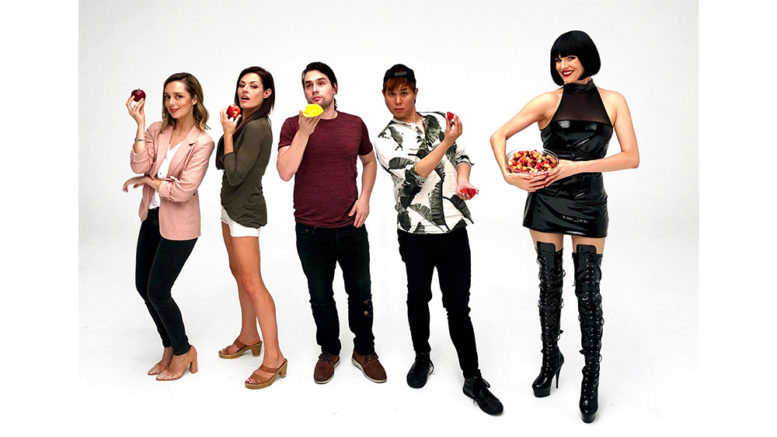 Umina Beach locals are breaking down the barriers of sexual liberation by creating a film about pleasure, choices, and all the sticky challenges in between.

Salad Daze is a short film about lifestyle choices, sexual preferences, and society’s criticism of people who are considered unconventional.

Writer, director, actress, and Umina Beach local, Amelia Foxton, said the fruit was an analogy for the different sexual lifestyle choices that many people had.

“My point in making this film was to very lightly, with a bit of humour, show how unnecessary it is for a negative light to be shone on any sexual lifestyles; as long as they stay consensual there is no issue,” Foxton said.

“Everybody can make their own choices and have whatever lifestyle they choose, and each choice is as valid as the next.

“I think it’s time to stop being narrow-minded; sexual choice is varied, natural, and healthy, just like people’s choice in fruit.”

The film only runs a little over three minutes, but it was just enough to impress film festivals around the world, with Salad Daze winning nine international awards already.

Fraser said the film was a comedy style skit which was supported by a talented hub of creatives from the Central Coast.

“Moving out of Sydney, I realised how everything could be done remotely, we have studio space, an amazing location, and there is an openness about people from here,” Fraser said.

“There’s a wonderful excitement about telling stories up here that I don’t think exists in Sydney anymore.

“This is a great opportunity to start gathering people together and start telling stories that come from a regional source but have an international impact.”

He said the short film was required to go through the whole film festival circuit before it could be screened in a public forum, which was around six months away.

“Once we can release it on social media, we can get Amelia’s voice out there more, and help her tell the stories she wants to tell, which is incredible,” Fraser said.

“We are currently developing a dramatic long-form feature film, and it’s very much inspired by Amelia’s experiences, but also something that will have international resonance.

“It will be quite challenging, but for all the right reasons.”

Foxton said during her travels she had discovered many people who still lived in secret due to their own sexual preferences.

“I am a pansexual myself, and my brother and cousin are both married in gay relationships, so I know many people with so many different sexual lifestyles,” Foxton said.

“So many of them have these difficult challenges they were forced to face because of a lack of acceptance in society, and it’s still so prevalent which I find incredibly frustrating.”

Foxton said she had been a disability advocate in the past, as her two children were on the autism spectrum.

She said this made her familiar with advocation, especially with members of the community who faced additional challenges.

“Advocating for sexual liberation can be quite a dangerous game; you can get yourself into a bit of trouble and come across a lot of hate, but I just figured that I am strong enough to do this,” Foxton said.

“I want to change the hearts and minds of society, and I hope when my children are adults, they will be living in a more accepting, open-minded world.

“To those of you who are out there, who aren’t considered conventional, you are not alone, we are all here, and we are all loving.”