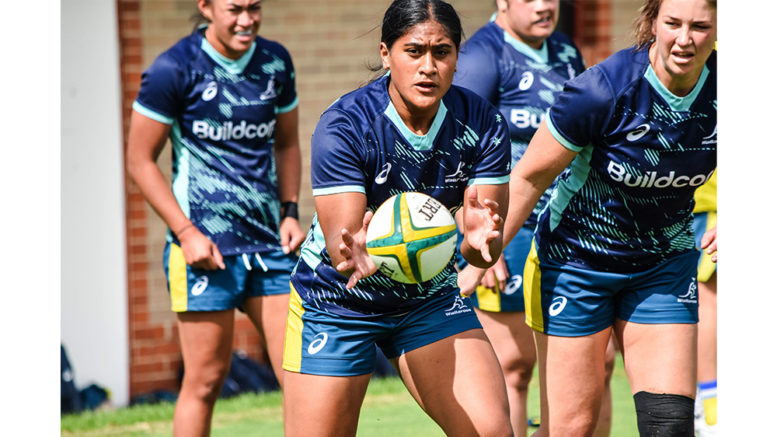 The up and coming Number 8 was one of 16 Test debutants handpicked by Wallaroos Head Coach, Dwayne Nestor, to take part in a national training camp at Canberra earlier this month, opening the door to the aspiring Wallaroo as World Cup preparations ramp up.

It was a dream come true for the MacKillop Catholic College student who spent her early teens discovering her love of the game.

“When I got the call about camp, I remember being pulled out of class and being handed a phone and it was Dwayno on the other end asking me if I’d be interested in a Wallaroos camp.

“I almost cried tears of joy right on the spot,” Faimasui-Brown said.

After impressing at camp, Faimasui-Brown has now been invited back for a second in February, something that shocked the 17-year-old.

“After camp, Dwayno asked me if I thought I deserved a callback and I was honestly unsure.

“I ended up telling him yes and he told me that I did deserve it, that he’d been watching me and my growth and that he saw potential in me, and that did make me cry,” Faimasui-Brown said.

The encouragement has dialled up the fire blazing within Faimasui-Brown, who’s now gearing up for a massive year of footy.

“Camp has really motivated me to do my best.

“I’m going to be driving myself hard in all my training because I want to earn my spot on the team,” she said.

Faimasui-Brown will need every ounce of that passion if she’s to succeed, with her first challenge to stand out amongst a field of exceptional talent in the NSW Waratah’s Development Training Group.

Faimasui-Brown is one of 29 players selected to train under the watchful eye of Head Coach, Campbell Aitken, over the remainder of summer before the 2021 Super W season kicks off in February.

From there she’ll need to impress at the second Wallaroos camp before shining throughout the Super W trials if she’s to have any hope of making the cut.

With 2021 also the year of her HSC, the pressure is on, but Faimasui-Brown isn’t worried about burn out.

“I do everything in the name of God, and for my family and parents who have sacrificed so much for me.

“I can’t say I don’t have self doubts, but my family and all those who believe in me are what motivate me.”

The thought of running out for Australia is also an extra special motivator.

“I love footy, it’s what I want to do with my life, and just the thought of getting to represent on the world stage and running out in that gold jersey, well it means the world.”