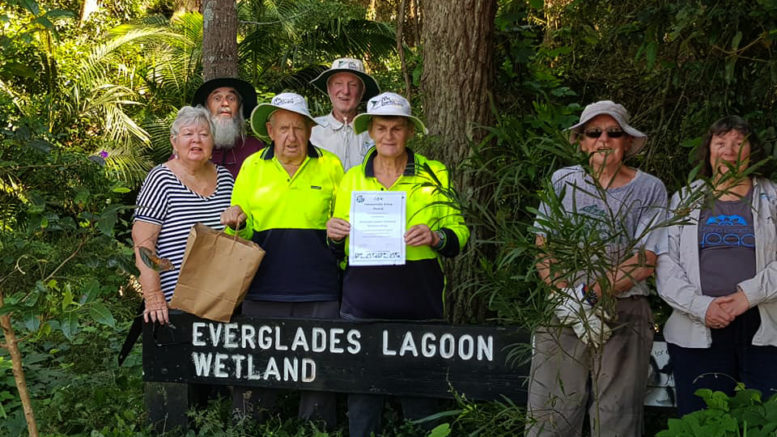 Members of the Everglades Lagoon Wetlands Bushcare Group with their award

The awards recognise individuals and groups who have worked for the region’s environment over the past 12 months.

CEN Chair, Hale Adasal, said the group was an outstanding example of the effort, determination and patience it takes to protect the local environment.

“The group has been quietly restoring the nature reserve at the end of Boronia Ave, Woy Woy for over 24 years,” Adasal said.

“The dedicated group of at least eight members has done a terrific job rehabilitating the bushland, which contains endangered ecological plant communities, back to its natural state.

“The group meets on the second and fourth Saturday morning of each month for approximately three hours.

“These people are heroes, leaving their legacy for our ecosystems.

“Convenors Fay and Peter Jones have been leading the group for 24 years, successfully protecting and restoring the nature reserve for the community and all the life forms it supports, including the human.”

Adasal said the awards were usually presented at an evening ceremony, but this year were handed out at a COVID-safe morning tea.

The Everglades group received its award on the site of its major works.

Other winners were Glenys Ray of Springfield (Most Outstanding All-rounder), Col Ruffels (Best 12th Man) and Wamberal Beach Save Our Sand (Rookie of the Year).