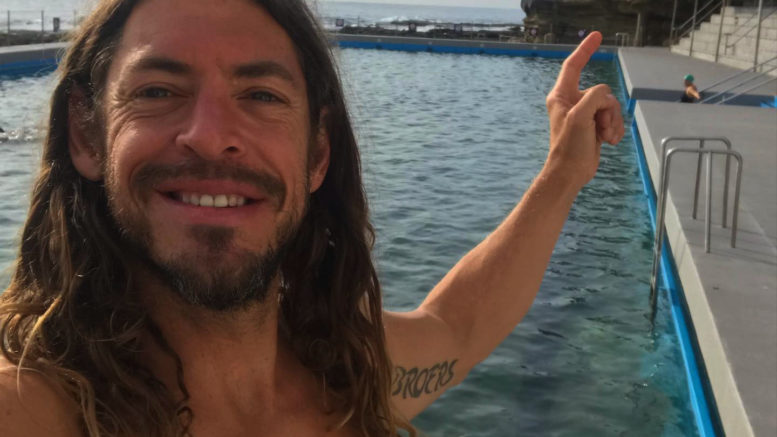 He’s tired, sore and more than a little salty, but Bryan ‘Dorf’ Dorfling’s Bondi 2 Budge charity swim is almost at its end.

The Budgewoi local is preparing for the final leg of his 100km swim that’s already seen him freestyle his way from Bondi Beach to Bouddi, raising valuable funds for San Remo’s Camp Breakaway with every stroke.

Arriving back on the Coast on December 10, bad weather conditions have forced Dorf to hit the breaks for the time being, but the ever positive larrikin said he was happy for the downtime after swimming 60kms and spending more than a week in the sea.

“I did 10kms at Terrigal over the weekend and the plan was to get back in the water from Monday, but Mother Nature is the boss and I’ll be waiting for the bad weather to pass.

“I’m hoping to be back in the water by Wednesday and finish up on Friday, just in time for Breakaway’s An Evening on the Grass celebration, but for now I’m just enjoying the rest and doing things on Mother Nature’s time,” Dorf said.

And while his unexpected break has left the finish line tantalisingly close, Dorf said he took solace in the fact that his fundraising goals had been smashed twice.

“When I started the swim, the goal was $5,000 for Breakaway, but we reached that in the first week, so it was doubled, and now we’ve doubled that and are creeping towards $11,000, which is nuts,” Dorf said.

With his borrowed mantra of ‘just keep swimming’ holding true, Dorf said he’ll be pushing hard to wrap the Bondi 2 Budge by the weekend.

“I’m basically thinking that I’ll have four big days or three even bigger days, but that’ll depend on the conditions and what the body will allow, but either way, I’ll be celebrating with everyone at Breakaway come Friday.”

Dorf is planning to start the final leg of his swim from Maitland Bay with locals welcome to join him on the water for parts of his journey.

An Evening on the Grass is a ticketed fundraising picnic being hosted by Camp Breakaway to commemorate Dorf’s Budge 2 Bondi, to be held on the grounds of their San Remo facility from 6pm on December 18.

It will feature live music, Christmas Carols and a visit from Santa.

Camp Breakaway is akin to Christmas for the disabled community

The Coast Paddle planned for September