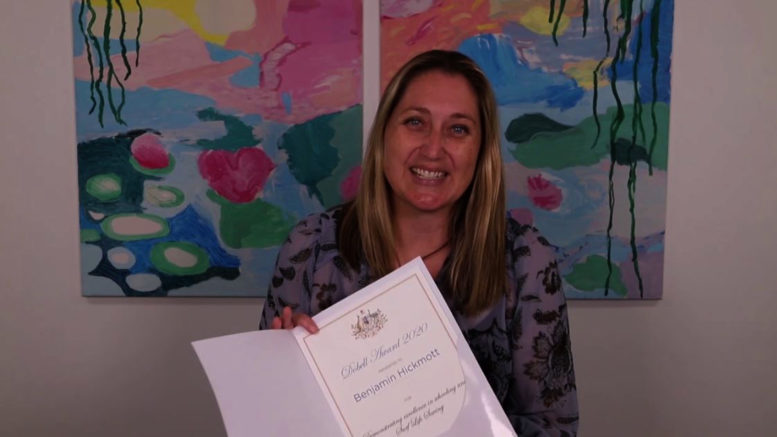 Students from schools across the North have been recognised in Parliament for their unwavering resolve in the face of the COVID-19 pandemic.

The efforts of 13 local students were raised by Federal Member for Dobell, Emma McBride, who used speaking time during the parliamentary session on December 3, to announce the recipients of the 2020 Dobell School Awards.

Describing the school year as a “marathon” for many students, McBride said that this year’s awardees were chosen for their contributions throughout such a challenging year.

“With so many school and extracurricular activities wound back in 2020, it’s important to recognise students who stepped up.

“So, the Dobell School Awards this year are recognising students who, despite the challenges they faced, stepped up to help their friends, families and community,” McBride said.

Avis and Ham, both of St Cecilia’s Catholic Primary School at Wyong, received their Awards for their incredible maturity and responsibility, and for the considerate and cooperative way in which they help others in their school community.

Fisher, of Wyoming Public School, received her award for her initiative to make poppies, magnets and cards for older people in the community.

Fry, of Warnervale Public School, was awarded for being a champion of fair play in her school sporting community.

Harrison, who is Tuggerah Lakes Secondary College ,Tumbi Umbi Campus, Captain, was awarded for going above and beyond in her title to provide ongoing support for her peers.

Hickmott, of the Glenvale School’s North Entrance Campus, was recognised for completing a Certificate II in Kitchen Operations at TAFE and being an active member with the Toowoon Bay Surf Life Saving Club.

Hondroyiannis, was awarded for the care and support he showed his peers and teachers.

Koppman, from Killarney Vale Public School, was awarded for her charitable endeavours, after she raised $1,000 for CanTeen Australia by dyeing her hair blue.

McCarroll, of Chittaway Bay Public School, received his award for his positive action to support others in the school and to improve the school environment.

Rutherford, from Mackillop Catholic College at Warnervale, was recognised for her constant service within the school and wider community, with many hours of community service dedicated to the St John Ambulance.

Sullivan, of Tacoma Public School, was acknowledged for the support and enthusiasm she showed helping staff and students during online learning.

Tierney, of Gorokan Public School, was recognised for admirably fulfilling her role of School Captain and for her contagious positivity and great initiative to organise an assembly during online learning.

Wettig, of Tuggerah Public School, was awarded for her exceptional contributions to girl guiding.

“As the school year draws to a close, I’d like to recognise all the principals, teachers, support staff, family, friends and carers who worked so hard to keep our students safe and keep them learning,” McBride said.

“These awards aim to highlight the effort that these students make to help their community and, most importantly, to thank them for who they are and what they do.

“They couldn’t do it without support.”

Disaster relief organisation to expand to the Peninsula