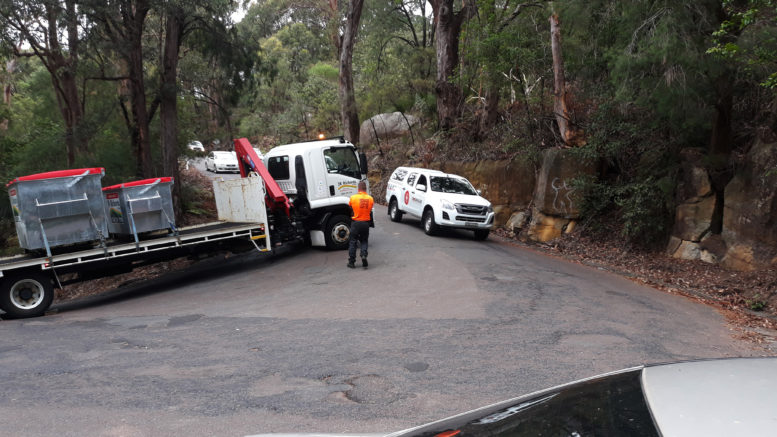 A truck was stuck on Debenham Rd Sth on December 2

Somersby resident Greg Hooper is stepping up his campaign to have traffic issues on Debenham Rd Sth addressed, even though Central Coast Council says it does not meet the criteria for Blackspot or Safer Road program funding.

Hooper has been agitating for years for safety improvements along the narrow road, which connects West Gosford and Somersby, with major problems being excessive speeds and inappropriate use by heavy vehicles.

“When a truck this size comes down the hill there is no room to manoeuvre out of the way.

“The road is only four metres wide and it’s worse when it is wet and stormy.

“There is a precipice on one side with no rails, and a rock wall on the other.”

Hooper said a “conga line” of oversized (vehicles) use the road as a rat run travelling to and from Somersby Industrial Estate.

He has again written to local MPs, Council and police asking for improved traffic management and policing.

But a spokesperson for Council said officers review the most recent crash data provided by Transport for NSW to identify and assess locations which meet the criteria for reactive funding under the Federal Government Blackspot and the State Government Safer Roads grant funding programs.

“Based on the current crash data provided by Transport for NSW, Debenham Rd Sth, Somersby, does not meet the criteria for reactive funding to submit a treatment option under either the Blackspot or Safer Road programs,” the spokesperson said.

Council officers have undertaken an on-site inspection to review the existing regulatory signage and line marking.

“It was noted that 50km/h signposting, curve warning advisory signage and Chevron Alignment Markers (CAMs) have been installed along Debenham Rd,” the spokesperson said.

“This signage and CAMS, together with the existing line marking, reinforces to motorists the appropriate speed limit applicable, delineates the travel lanes and warns motorists of approaching curves and advisory speeds.

“Council officers will further investigate whether any additional line marking and signage improvements or the installation of ‘50’ pavement markings are warranted.

“Council is also working with NSW Police and installing traffic counts along the road.

“The results from the speed and traffic counts will assist Council with any potential future nominations for road safety funding.”