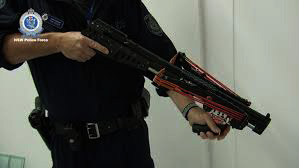 The NSW Police Force is warning members of the community about the illegal importation and possession of prohibited weapons such as the RS-X7 ‘Doomsday’ Slingshot Crossbow.

The importation of weapons, firearms, firearm parts, ammunition, firearm magazines and accessories for firearms is controlled and restricted by Australian Border Force (ABF).

To import any of these items into NSW, the importer must first obtain approval from either the Commonwealth Attorney General’s Department or from the NSW Police Firearms Registry.

Since August this year, the NSW Police Force has received information relating to the illegal importation and possession of RS-X7 ‘Doomsday’ Slingshot Crossbows into NSW from the United States.

This crossbow is capable of firing metal, glass and clay ball projectiles, as well as arrows, and is classified as a prohibited weapon by the NSW Firearms Registry.

Drug and Firearms Squad Commander, Detective Superintendent John Watson, said these weapons represent a major threat to the safety of the community and emergency service personnel.

“With Christmas only one week away, we want the community to be aware of the dangers associated with prohibited weapons like this,” Det Supt Watson said.

“We know these items are marketed online as ‘shooting toys’, however, they are very capable of inflicting serious injury or even death.

“Specialist detectives are now conducting inquiries into the possession of slingshot crossbows across the State.

“Initial information has identified several individuals that have recently purchased these weapons from Las Vegas, Nevada.

“We are calling on those in the community who have a slingshot crossbow or other prohibited weapons in their possession to surrender the items to police immediately otherwise detectives will soon be on your doorstep to seize them,” Det Supt Watson said.