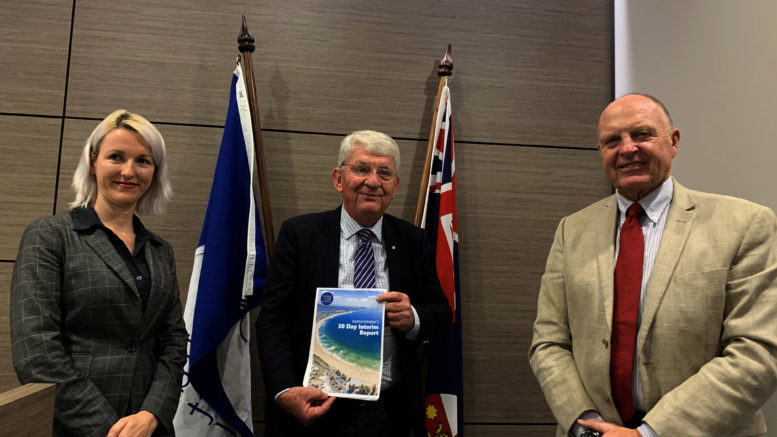 Central Coast Council has a $565M debt, it was announced on Wednesday, December 2, when interim Administrator, Dick Persson, delivered his 30-day report on Council’s financial crisis.

Part of this year’s debit is Council earmarking $45M for redundancy payments to staff.

Reducing staff is one of a raft of options Council will take to begin the task of reducing the huge debt.

Another $5M has been earmarked for recruiting staff to critical or revenue generating positions at Council.

The Q1 report was delivered on December 2, along with a 10-page interim report on the financial situation which began to publicly unfold at the beginning of October.

More than 400 people were watching on youtube as Administrator, Dick Persson, held the extraordinary meeting to reveal the depth of the debt.

Persson said the catastrophic error of the elected Council was their failure to understand that the organisation had less than $5M in unrestricted cash at the beginning of their term.

After they were elected in 2017, they set about a program of expanded capital works and expanded services that they could not afford.

Persson said that apart from budget mismanagement, Council funded much of this expenditure from restricted reserves which was either unlawful or done without the approval of the elected body.

However, Persson said there was no evidence of theft or corruption and the councillors could not have been expected to have identified the unlawful and unauthorised use of restricted reserves.

He said it was not identified in reports to Council by the CFO or the CEO, nor was it identified in the NSW Auditor General’s audit for the past three financial years.

Persson said the community had been badly let down and widespread anger was totally understandable.

He asked the community not to take their anger out on the working staff who had nothing to do with this.

“On behalf of Council, I acknowledge the hardship that these actions will cause and sincerely apologise for the real impact that this financial mismanagement will have on all residents and ratepayers,” he said.

In dot points, Persson outlined some significant costs to Council in the past three years.

These included: amalgamation costs of upgrading the IT systems and infrastructure ($50M with $8M ongoing); $39M loss of revenue from an IPART pricing decision for water, sewerage, drains and waste services from 2019; staff costs increasing by about one third and staff numbers increasing by 250 full time equivalent positions; and, increased costs and lost revenue from bushfires, floods and COVID-19 estimated at $10.5M.

“While there were mitigating circumstances which may explain how the 2019-20 budget got away from Council, with an $89M operational loss, there is no reasonable excuse for this current year’s budget over run, which is now forecast to blow out to $115M,” Persson said.

“If the tough measures outlined later in this report were taken in March/April last financial year, Council could now be $50M to $100M better off.

“Some members of the elected body have claimed that they were denied information by ‘council officers’.

“The elected body has ample powers to obtain any financial information they want.

“Whether they did not know this, or did not know how to do this, they also failed to perform one of their most important responsibilities.

“I will be asking the Minister for Local Government for a further three month appointment as interim administrator to oversee the recruitment of a new CEO, to deliver a balanced budget for 2020-21, and to oversee the introduction of appropriate financial reporting systems as well as the introduction of contemporary budgeting systems and practices.”

Persson outlined a series of measures to achieve the necessary turnaround including: asset sales of at least $40M over each of the next two years; further borrowings; a substantial rate increase; an increase in some Council charges; a major reduction in Council’s senior and middle management numbers; and, a reduction in staff numbers to return to the level at the time of amalgamation.

He also flagged that he expected that the councillors could be returned after his second three-month stint if the Local Government Minister agreed to his request to extend his term for a second three months.

However, he would be suggesting that if the councillors returned, that they have an administrator style person in charge of finances to work with them so that they couldn’t change the budget that he would have set up for them.