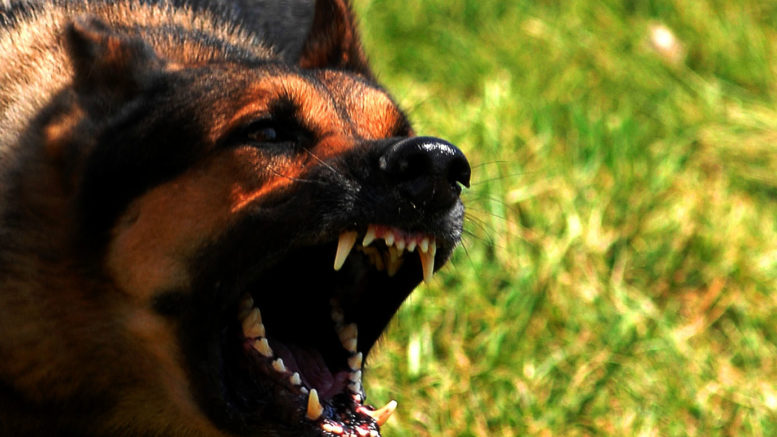 Norman, a 55th Security Forces Squadron military working dog, waits to be unleashed and go after his target during training April 17. The Offutt K-9 unit performs regular training to maximize the dogs effectiveness in the field. (U.S. Air Force Photo by Josh Plueger)

As the Central Coast looks on track to record its fourth straight year as the worst LGA in the state for dog attacks, Hamlyn Terrace’s Judi Roxburgh is demanding that Council do more to tackle irresponsible dog ownership in the region.

Roxburgh’s life changed forever on September 6 when she and her Mini-Foxie, Buddy, were attacked by two American Staffies whilst out on a Father’s Day stroll.

Buddy was mauled to death, while Roxburgh sustained injuries to her arms whilst trying to save him.

“As soon as I saw them running at us, I knew it was going to end badly.

“I tried to protect Buddy, but they started biting and ripping at my arms to get to him.

“I just started screaming until people came running out of their houses, but there was nothing anyone could do.

“They killed him in 30 seconds,” Roxburgh said.

Both dogs involved have since been put down, but after learning about the Coast’s woeful track record of dog related violence, Roxburgh believes it’s time for some big changes.

“I was told by the attending Council Ranger that we are the worst LGA in the state for dog attacks and that locally, Rangers typically deal with one to two pet deaths a week, which shocked me.

“When I asked them what dog owners should do to protect themselves and their dogs, they recommended carrying around a sawn-off golf club or hockey stick for defense.

“That was the actual advice I was given from a council employee,” Roxburgh said.

According to official Pound and Dog Attack Statistic Reports by the Office of Local Government, the Central Coast LGA has been the worst in NSW for dog attacks every year since it was formed in 2017.

Prior to that, the Gosford LGA had been the worst for dog attacks every year since 2014, with the Wyong LGA consistently ranked in the top 10.

Both former LGA’s were also consistently ranked the highest or very high for serious dog attacks, which the Office of Local Government classifies as “attacks where a person was involved and where the injury resulted in medical treatment, hospitalisation or death.”

This year the Central Coast LGA has recorded 191 dog attacks and 23 serious attacks, the highest in the state, with data for the October-December quarter still to be published.

Knowing firsthand the grim reality of these statistics, Roxburgh has started seeking out locals with similar lived experience.

“I put my story on social media and I’ve had hundreds of responses from other locals.

“Their stories are shocking and that’s why I want what happened to Buddy to be a pivotal moment for the Coast.

“This has been going on for years and it’s high time Central Coast Council did something about it.

“In March, a 91-year-old woman died on the South Coast from a dog attack.

“Do we need to get to that point before something changes?”

Complicating the issue further is the sheer number of dogs living on the Coast, with the Office of Local Government putting the number of microchipped dogs in the LGA at 136,736 as of the 2020 July-September quarter, the highest in the state by a significant margin, with the second being Blacktown LGA at 89,143.

With that figure not accounting for the number of non-microchipped dogs, Roxburgh said that it was becoming increasingly clear how the Coast became the capital for dog related violence in NSW.

“Here on the Coast there is no limit to the number of dogs that can be registered to any one person, and that, along with council’s resolution to educate the community as opposed to punishing negligence, is the problem.

“Council needs to take a hardline approach to dog owners who do the wrong thing.

“Rangers should be using the powers they have to fine owners whose dogs or actions put others at risk.

“Given how long this has been going on, I’m frankly astounded that council isn’t being more proactive and I encourage other residents to start demanding they do more to address this issue.

“Do we really want to keep being known as the dog attack capital of NSW?” Roxburgh said.

A spokesperson for Central Coast Council said council was working hard to educate the community on the importance of responsible pet ownership and that it was important to consider the current definition of a dog attack when examining local statistics.

“The Central Coast LGA has the highest rate of dog ownership for any LGA in NSW and subsequently has one of the largest numbers of reported dog attacks.

“Under the Companion Animals Act, a dog attack is defined as a dog rushing at, attacking, biting, harassing or chasing any person or animal (other than vermin), whether or not any injury is caused to the person or animal.

“This means that even if a dog rushes at a person from behind a fence, it is classified and reported as a dog attack.

“All reported dog attacks (12 in this calendar year which have caused dog and cat companion animal deaths) are investigated and actioned by Council Rangers in accordance with the provisions of the Companion Animals Act.

“Given our high rate of dog ownership, responsible pet ownership is something that council takes very seriously, and we do not endorse or encourage anyone to carry a weapon whilst in public.

“It is the owner’s responsibility to ensure their dog is under control at all times.

“Penalties for dogs that attack are set by the State Government and are enforced by council in accordance with the legislation.

“Council is also looking to develop a policy relating to responsible pet ownership which will support and guide our response and corrective action regarding incidents such as dog attacks.

“However, all animals must be registered, and the treatment of the animals must comply with the Prevention of Cruelty to Animals legislation.

“Council investigates all reports of restricted breeds in accordance with the provisions of the Companion Animals Act,” the spokesperson said.

The spokesperson also provided the following list of some of council’s proactive pet ownership measures currently in effect.

They are: Responsible Pet Ownership education program – which includes a dog safety preschools program and bi-annual microchipping events; regular communication direct with the community on responsible pet ownership and their responsibilities both to their pet and the wider community; regular routine patrols of beaches and reserves to address the issue of unleashed dogs; signage at dog friendly locations and known popular walking spots; responding to complaints of roaming dogs and impounding unattended dogs; and swift investigation of reports of nuisance dog behaviour and aggressive dog incidents and enforcement action where appropriate for breaches of the Companion Animal Act.

Litany of errors date back to 2016