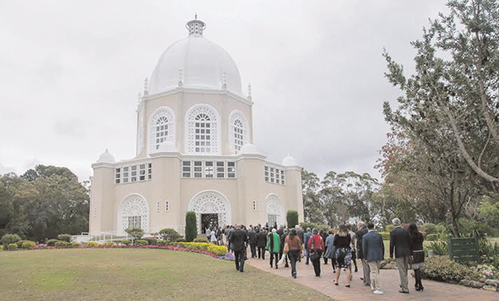 While religious groups and institutions have struggled to adapt in the face of COVID-19, the Central Coast Baha’i community is thriving.

Scattered across all corners of the Central Coast, the community’s practicing members have embraced the opportunities that the pandemic has thrust upon them, integrating technology into their faith as they continue to pursue personal and spiritual fulfilment through the principles of unity, equality and peace.

Mardi resident, Vedad Badiyan, is a member of the community and said that when lockdown was first announced in March, it was a pivotal moment for local Baha’is.

“We have many high risk people in our community, so in order to protect them and comply with pandemic restrictions, we ceased all face-to-face activities,” Badiyan explained.

But with unity being the cornerstone of their faith, going months without meeting was simply out of the question, so they chose to go online, embracing Zoom and other digital platforms to continue their spiritual gatherings, information meetings and study circles, and according to Badiyan, they’ve emerged stronger for it.

“It has been quite a challenging year, but there have been many positives for us to take away.

“By going online, our members have embraced new paradigms, new spaces and new ways of thinking.

“It’s also helped us connect with more people, as Bahai’s from neighbouring LGAs have been able to attend our activities, which rarely happened when we met in person, and just in general, it feels easier for us to come together now.

“We’ve had the odd tech issue here and there, but even my mother in her 80s can now confidently use Zoom, so in a way the pandemic has forced a lot of positive change.

“It made us innovative,” Badiyan said.

“2020 is actually the centenary of the Baha’i faith in Australia, but it’s also the 50th anniversary of the Central Coast Baha’i community, and it would have been awful if we couldn’t come together to celebrate.

“We’ve held two celebrations to mark the centenary, one in April in accord with the arrival of the first Baha’is to Australia and another in October,” Peak said.

Badiyan said he was hopeful that the community would be able to meet in person early in the New Year to celebrate their anniversary, but noted that for the time being, members will be sticking with online only gatherings and events, which members of the wider public are welcome to participate.