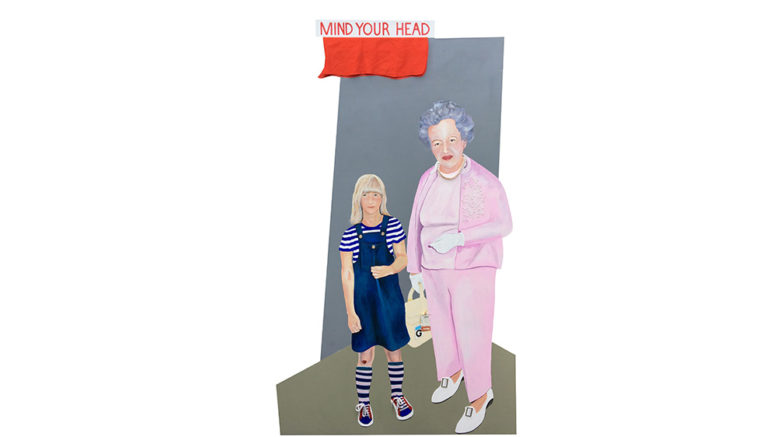 Jane Gillings of Avoca Beach is one of over 30 female artists to be celebrated for their talent and work, as part of the HERE I AM: Art by Great Women exhibit at the aMBUSH Gallery in Canberra.

The exhibit, running until February 28, is inspired by the Know My Name movement, which is in cultural partnership with the National Gallery of Australia.

Gillings’ portrait, Arcadia, is modelled off a photo taken in 1975 of herself as a child and her grandmother, Es, just before they boarded the cruise ship, The Arcadia, which was heading to Cairns.

She said the self-portrait was a very emotional piece to make.

“Being the youngest in the family with five older brothers, I was often too little to be included in things, which, to this day leaves me with a serious case of feeling left out,” Gillings said.

“Thankfully, my paternal grandmother, Es, always singled me out for special treatment.

“We were chalk and cheese, but we were really close as well.

“I remember absolutely loving the outfit I was wearing but feeling a little bit shy about having my photograph taken.”

“It also incorporates some objects from both of us because usually, I do sculptures,” Gillings said.

“For example, the socks I was wearing when boarding the cruise, I still actually have, because I loved them so much, so I incorporated them into the picture.

“I also used my grandma’s pearls.

“The other thing I really love about this picture is that it depicts both our personalities in the way that we are both standing in pretty much in the exact same pose.

“But she is really standing as she has been trained to stand, whereas I am standing that way and pinching my pinafore because I am embarrassed about getting my photo taken – so there is a really different reason for both poses.”

The HERE I AM: Art by Great Women festival is free and on display 24 hours a day.

“The whole point of having these exhibitions is to address the inequity in art exhibitions,” Gillings said.

“There is a really large disconnect between the number of women who go to art school and graduate as artists, compared to how many of them are shown in galleries, either commercial or not commercial.”

The exhibition is open to the public from 10 am-6 pm weekdays and 12 pm-5 pm on weekends.