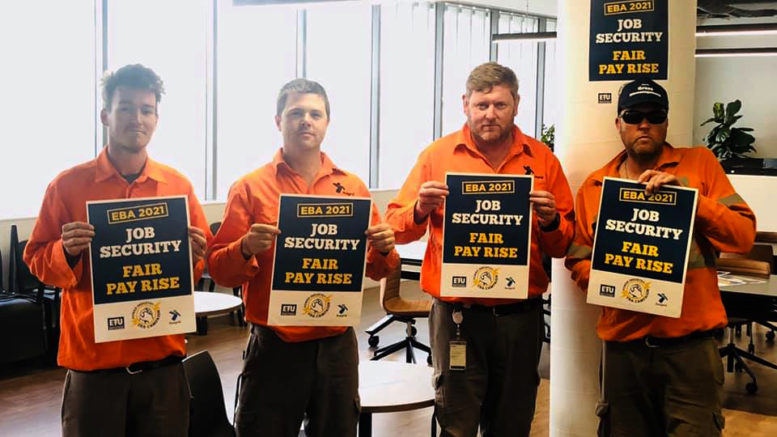 Ausgrid workers are angry about a proposed wage freeze

Around 700 Ausgrid workers on the Central Coast face an uncertain future, with the company proposing a one year wage freeze from February, and 200 redundancies across the network announced the week before Christmas.

Secretary of the Electrical Trades Union NSW & ACT, Justin Page, said that while redundancy numbers on the Coast were not yet known, any job losses would impact Central Coast depots.

Ausgrid has proposed a one year wage freeze for all Enterprise Agreement (EA) employees from February 2021 as what it says is “a necessary response to the financial challenges the company is facing resulting from the impacts of COVID-19”.

This would be followed by pay increases equal to CPI for the second and third year of the proposed agreement, the company said.

But Page said that with the uncertainty surrounding the CPI, the move could effectively result in a three year freeze.

“Our members have been extremely busy across the network, with more frequent storms, rain, floods and fires, we’ve had the lot,” he said.

“They’ve worked really hard over the last three years to keep power on or restore power quickly for customers.

“We surveyed our members about the proposed wage freeze and 94% responded that they are prepared to take legal industrial action, that’s a strong indication that the workers aren’t happy.

“They are also expected to work right through the holiday season.

“If storms hit, they will be required to restore power.”

Ausgrid says senior staff are already experiencing a wage freeze with no salary increases this financial year, which would likely continue in 2021-22.

“All Ausgrid EA employees received a 2.25 per cent pay increase this year, in March, as part of a total 7.5 per cent increase over the period of the last EA,” a spokesperson said.

“The proposed one-year wage freeze would take effect upon commencement of the new EA.”

Ausgrid CEO, Richard Gross, said the company was in “tough times” and was restructuring the business, cutting back office positions and reducing the executive leadership team by more than 20 percent.

“Our executive team and senior managers have been on a wage freeze since mid-2019 and I have personally taken a 10% wage cut this financial year,” he said.

“In addition to this, our shareholders have not had a dividend for two years and are unlikely to receive one for another two years.”

Gross said the goal was to keep downward pressure on costs to customers and protect as many jobs as possible.

“We have worked hard to ensure the wage freeze proposed for EA staff is for just one year and to keep the current, active entitlements for our people,” he said.

“We know this is a tough time for everyone and this is not a position that anyone would hope for, but given the circumstances, this is a fair and balanced offer.”

The proposal has been put to unions and staff as part of the enterprise bargaining process, with the current Enterprise Agreement due to expire in February.

The United Services Union says Ausgrid staff, who have endured five years of restructures that have resulted in more than 2,000 jobs being cut, feel let down by the proposed wage freeze.

A Union spokesperson said staff at the partially privatised company, the largest electricity distributor in Australia, should be commended for their efforts to keep the lights on for millions of homes and businesses on the Central Coast and in Sydney, Newcastle, and the Hunter through a challenging year which has seen a health crisis, bushfires, and major storm damage.