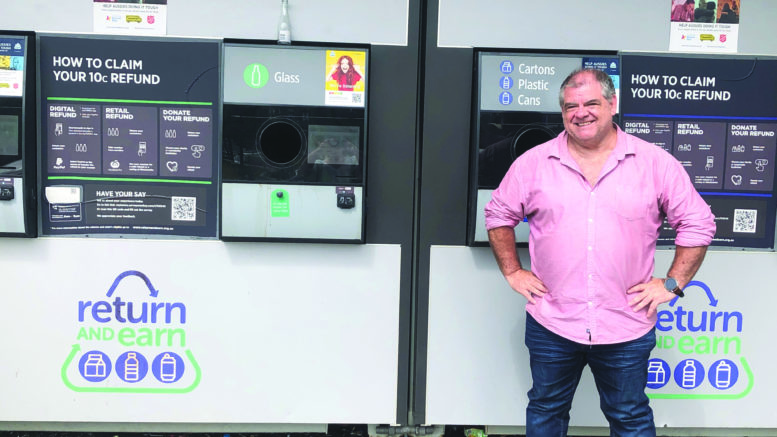 Chris Byrne at the Return and Earn machine in Woy Woy, which is often overflowing

Member for Gosford Liesl Tesch has approached the owners of the Umina Mall asking them to incorporate a Return and Earn reverse vending machine (RVM) into their redevelopment, which is now underway.

She is also encouraging other businesses on the Peninsula with extra parking spaces to consider installing a reverse-vending machine to meet the demand from the community.

The move comes in response to community calls for more of the machines on the Peninsula, with the one available machine, located at Woy Woy, regularly full to capacity.

Ettalong resident, Chris Byrne, said so many residents were wanting to recycle cans and bottles that the machine, operated by TOMRA, was often non-operational as it fills up quickly.

“The Peninsula is served by just one RVM,” Byrne said.

“Compare that with the Gosford and Erina area including Holgate, Green Point, Point Frederick and Springfield which have a population of 34,283, so the Peninsula has about 5000 more people.

“Unlike the Peninsula, however, the Gosford-Erina area is served by five RVMs – at Gosford Showgrounds, Erina North, Green Point, Erina Fair and (the temporarily closed) West Gosford RVM.

“If our local RVM at Woy Woy is, as is often the case, either full or overcrowded then it is a 15-minute drive (at least) to either Kincumber or West Gosford.

“It isn’t too difficult to work out that a larger population would require more RVMs due to overcrowding and more frequent emptying.

“It appears that the TOMRA machines are certainly not being placed where there is greatest need.”

Byrne suggested there were many other possible sites for the machines including behind West St, Umina Beach, the small carpark near Ettalong Oval, Peninsula Community Centre, Rogers Park and James Browne Oval car park.

While Byrne appealed to Central Coast Council to intervene, Tesch said Council isn’t the determining authority for where RVMs are located.

“While we aren’t aware of the reason behind Council not hosting an RVM in (some of the spots listed), it could be assumed to be related to the idea that removing community parking spaces for private profit would be in conflict with Council-owned land use principles,” Tesch said.

“TOMRA and the NSW Government also started a relationship with Woolworths to locate RVMs in their car parks.

“Private providers have to make the determination about whether they are willing to forgo the space in their lots in favour of locating an RVM.”

Tesch said it was great to know that tens of thousands of discarded bottles are not going to landfill or ending up in the environment and she would continue to encourage businesses with extra parking spaces to consider installing a reverse-vending machine.