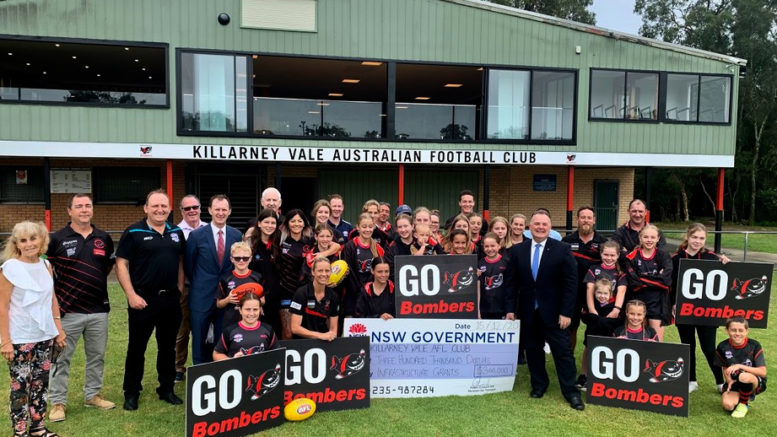 Killarney Vale AFL Club will benefit from $300,000 in funding to construct designated female and umpire change rooms, thanks to the NSW Government’s Infrastructure Grants program.

“Two change rooms for the exclusive use of female teams, as well as an umpire’s room, will be made possible by this funding,” he said.

“AFL is rapidly becoming one of the most popular sports across the Central Coast and I am proud that this project will ensure that females have the same amenities and access that males already enjoy.

“I want to congratulate the Club’s President, Paul Forster, for submitting such a fantastic funding application.”

Paul Forster said that it was a wonderful outcome for the club.

“Female designated change rooms should be the norm rather than the exception at all sporting grounds,” he said.

“We hope that this will become the new standard for all sporting amenities not only across the Central Coast but all of Australia.

“Females playing sport deserve it and we thank the NSW Government for sharing our vision to make this a reality.”

AFL NSW will also provide $100,000 for the project, to ensure a regional standard building is achieved.

Central Coast Council also received more than $900,000 in 2018 from the NSW Government’s Stronger Country Communities Fund to upgrade the club’s facilities, but is yet to spend the funds.

‘Because We Care’ Boutique to launch a teen empowerment program

Eyes on May Budget funding for the ABC