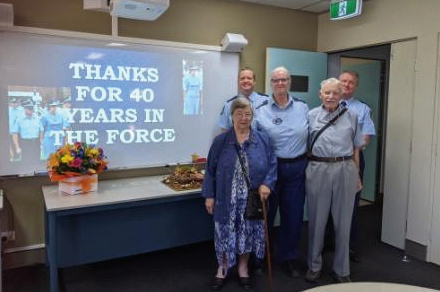 Brisbane Water Police District has commended one of its own for 40 years of service to the community.

Detective Senior Sergeant Vivienne Crawford was congratulated on her milestone at a surprise morning tea event on December 8.

Crawford said she had received letters of appreciation from her command.

“All of a sudden my parents from Sydney walked into the office – it was a complete surprise,” Crawford said.

“It was humbling but it was lovely to have it acknowledged.”

Crawford said she had witnessed many changes in policing over the years but was committed to ensuring female police officers are seen.

“Women have gone through the hard yards … there were very few of us at the beginning,” Crawford said.

“It was actually only two classes before me that female (police) were allowed to wear guns as they were only really doing school and traffic stuff.

“But we can do anything now.”

Crawford has been working in the policewomen’s network for several years to help try and promote women into higher ranks, but noted it was a slow process.

With 40 years of service in the NSW Police force, Crawford has worked in a variety of roles including as a detective in child protection and in the homicide squad.

“I worked in the squad on major inquiries like the family law court bombings and killing of Dr (Victor) Chang.”

Crawford said the secret to being able to manage the impact of these highly stressful cases was to talk it out.

“I’ve coped as long as I have by having a laugh and you have to have outside interests to keep you grounded,” she said.

“I have close friends and family and it helps to get it off your chest.

“My role here is more on the proactive side, focusing on crime prevention strategies.”

The senior sergeant moved to the Coast 12 years ago following an injury.

And now as crime coordinator at the Brisbane Water District, Crawford said she continues to serve with the focus on protecting people.

“As cliché as it sounds, I joined the police to help people … I work for the community; I’m not working for the government,” she said.

“You’re there to protect people who can’t protect themselves, and I’m passionate about that.”