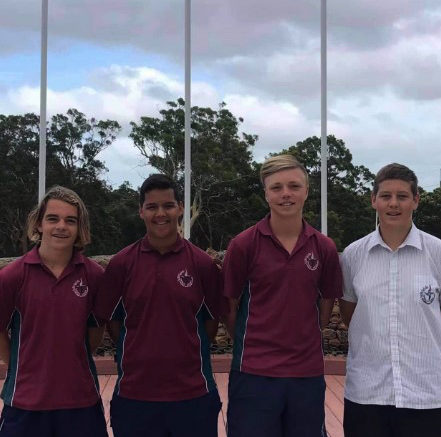 Four teenagers and two other members of The Lakes Surf Life Saving Club carried out a mass rescue of 18 people at Soldiers Beach, Norah Head.

The rescue began at about 6.30pm on Friday, November 27, when 14-year-old Ben McCulkin, saw a number of people caught in a fast-moving rip sweeping them out to sea.

He saw the commotion from the top car park at the beach and sprung into action.

He said he heard the youth group members, aged between 12 and 15, shouting for help and struggling in the 3ft swell, and the rip was pulling them into deeper water and closer and closer to the sharp rocks along the northern headland.

It was out of the surf club’s operating hours as the flags had gone down at 5pm.

There was no lifesaving gear available and no access to the clubhouse.

Ben didn’t have any floatation device either, but swam out and managed to retrieve three people to safety before making his way back out to the group and retrieved another four people.

Brayden Hawkins, 15, and Johnny Walker, 70, also quickly made their way to the rocks where some people had been washed up to and helped them to safety on the beach.

“When I swam out for the second lot of people and I saw them there I thought, sweet, it’s all going to be good,” Ben said.

Another Lakes Beach SLSC member, Dave Solman, and some members of the public that were strong swimmers used a race board and immediately paddled and swam out to four swimmers in distress, who were also safely taken back to the shallows where teenagers, Daniel Leahy and Cooper Sweeney, helped guide them to shore.

Dave and Ben returned to the water to retrieve the remaining two people, a 12-year-old in distress and an adult that went to the aid of the child, who had now been swept 150m from the beach.

They quickly realised that they wouldn’t be able to safely return the pair to shore, so they made the decision to return via a safe, flat area of the rocks at the front of the headland.

Brayden was on the rocks waiting to help and guided Dave and Ben to safety using signals.

“It was really lucky that those guys were there, too, because there would have been casualties as well,” Ben said.

Once the 18 people had been safely returned to the shore, the lifesavers rendered first aid for the many cuts, bruises and abrasions from sharp and slippery rocks.

“If our team had not acted so swiftly and professionally, this mass rescue could have gone horribly wrong and ended in tragedy,” said proud President of The Lakes SLSC, Sean Leicester.

“It was great to see so many of our youth members spring to action and use the skills and training that our club provides to help save many lives.

“The club’s really brought us all up as a team and we knew exactly what to do with communications and signals,” Ben said

“Afterwards, when the adrenaline started to wear off, it was like well, that just happened, and it could have been a catastrophe.”

Ben, Brayden, Daniel and Cooper have all been nominated for a well deserved Rescue of the Month Award from Surf Life Saving Central Coast.

All four boys take part in a partnership program between The Lakes Surf Club and their school, St Brigid’s College, in which they spend Friday afternoons training for their Surf Rescue Certificate and/or Bronze Medallion.

They are assigned patrols and become members of the club.

One of the rescue team, 70- year-old Johnny Walker, is one of the trainers, and along with another Lakes lifesaver, Dave Solman, just happened to be at Soldiers Beach that day.

“If our members hadn’t intervened, the incident could very well have ended in tragedy,” Sean said.