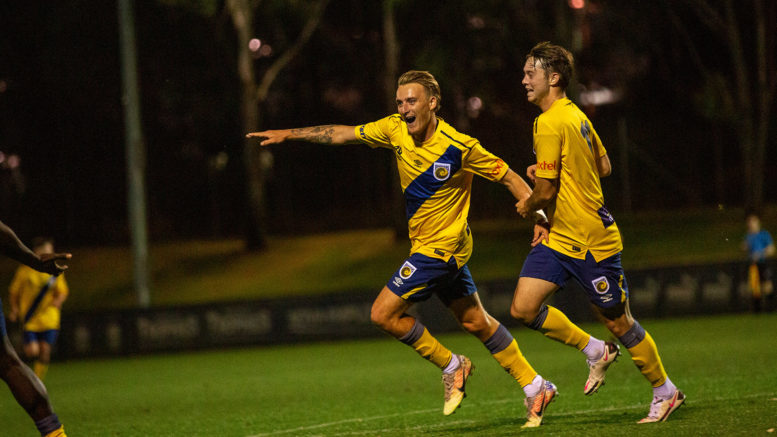 Emerging youth fullback, Matt Hatch, has signed a scholarship deal with the Mariners, with the born and bred Coast product set to get his A-League shot at 20-years-old.

Blessed with electric pace and with great passing, Hatch has spent the past two A-League pre-seasons working with the senior side, and after a brilliant NPL2 campaign this season, he has been rewarded.

Hatch came off the bench in the NPL2 final early in October, playing a key role in a more advanced position than normal as he struck twice in extra-time to help Nick Montgomery’s side to the Championship.

The opportunity is a dream come true for Hatch, who began his football journey with the Woy Woy Roosters, before joining Kincumber and eventually the Central Coast FC representative program, which would feed into the Mariners’ Academy.

Now the former Asian Champions League ball boy will have his chance as part of Alen Stajcic’s squad for the A-League 2020/21 season.

“It really is a dream come true for me, I used to go to all the games, I was a ball boy,” Hatch said.

“I’ve always wanted to play for the Mariners, because they are my hometown team and it’s just an unreal feeling to be here now.

“I had a few cracks in pre-season, and last year’s was a real eye opener for me to think that I could actually have a chance at a contract.

“It showed me where I could be if I put my head down and worked hard, so I used this past NYL and NPL season to really give it a crack, and I’m pleased that I’m getting rewarded for all the hard work that I’ve put in.”

Mariners’ A-League Head Coach, Alen Stajcic, welcomed Hatch aboard and said that it was great to see a local talent coming through.

“Hatchy is a local product, born here on the Coast, and he’s come through our youth teams in the last few years,” Stajcic said.

“We’re excited to have him on board, and we know that he has talent and some attributes in his arsenal that have been so effective for him at youth level.

“The task for him now is working hard to transfer those skills and adapt to the professional level to become an effective A-League footballer.”