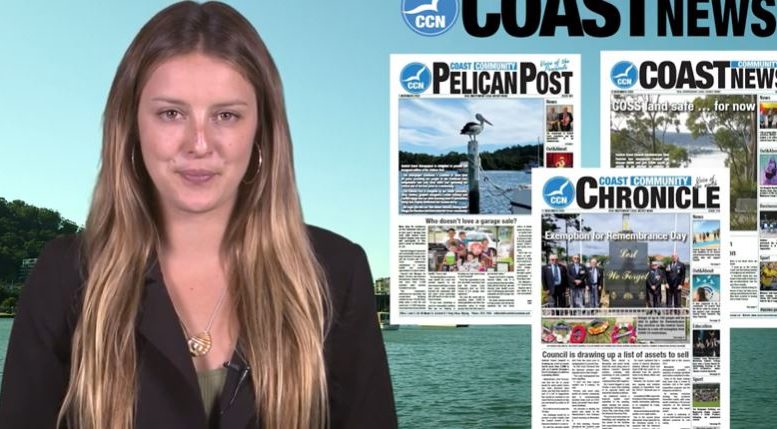 Hi I am Jacinta Counihan and you are watching Coast Community News 5@5 November 13, 2020. New council developments have come out this week so let’s go to David who has more.

Central Coast Council Administrator Dick Persson has announced Council has borrowed $50M and will sell $30M worth of assets in an attempt to address an expected $89M deficit. The loan has come from a unnamed source, the administrator citing commercial confidentiality. Mr Persson will also allow 10 residents to address his council meetings each time. Back to you JC.

A contentious development in Kariong close to the sacred land of Bambara has prompted Indigenous and Non-Indigenous community groups to join forces in opposing a development by Darkinjung Local Aboriginal Land Council. We spoke to CEA spokesperson Jake Cassar about his concerns.

There has been a major milestone for Gosford’s affordable social housing. Parliamentary Secretary for the Central Coast, Adam Crouch was at the topping-out ceremony earlier today down at 23-25 young street, West Gosford.

COVID safe Remembrance Day services were held around the Central Coast on Wednesday to mark the 102nd anniversary of the Armistice that ended the First World War in 1918.

This year also marks the 100th year of the Celtic Cross War Memorial in the grounds of the Gosford Anglican Church. We spoke to historian, Merial Jackson, about her inspiration behind the poppy display she created for the anniversary.

Local kicked out of Guardian Offices for Assange article

On Monday, the Australian senate passed a motion noting the plight of Wikileaks publisher, Julian Assange, who is in UK prison. Internationally acclaimed local documentary filmmaker from Avoca, Mike Rubbo, was thrown out the Guardian office in Sydney for submitting an article by former guardian journalist Johnathon Cook about the publications abandonment of reporting on Assange. We welcomed Mr Rubbo into our office to tell his story.

Thanks JC, Central Coast Oztag has done it again, dominating the field at Australian Oztag’s NSW Senior State Cup. CCO went into the revamped contest as a force to be reckoned with, with 15 teams in the mix and going for the gold. And there was gold aplenty, with 10 teams making it into their grand finals and six coming away with the win.

The Men’s 40s, 45s, 50s, and 55s and its Senior Women’s and Men’s Opens Division 2 teams all won, setting the club up to take this year’s Club Championship for the second year running.

And the Mariners club legend and all-time leading scorer, Matt Simon, will remain with the Club for the A-League 2020/21 season as coach Alen Stajcic bolsters the senior ranks of his squad. The 34-year old striker hinted at another season after the Mariners draw with the Wanderers in the post-COVID restart and has now confirmed he will return in a playing capacity and also as a mentor for younger players as part of a ‘dual role’.

Simon, who played his junior football at East Gosford, has scored 51 goals in 194 appearances for the Mariners since making his debut in the 2006/07 season and has been captain since returning to the Club at the beginning of 2018/19.

Moving onto the weather, this weekend is going to be a hot one with Saturday being sunny and topping 25 and light winds becoming southeasterly 15 to 20 km/h in the early afternoon then becoming light in the late afternoon.

Sunday will be 27 and Sunny with Light winds becoming northeasterly 15 to 25 km/h during the day then tending northerly during the evening. Back to you JC.

We leave you today with a chat we had with local artist, musician, music video creator,  makeup artist and costume designer, Benjamin Fraser, whos music video The Bonnie Banks of Loch Lomond by Ella Roberts, has reached nearly 7 million views on YouTube. He told us about the diverse creative community on the Central Coast and how proud he is to be a part of it.

Thanks Hayley, and all of these stories and thousands more are available on our news website and remember to pick up a copy of this week’s Coast Community News, Pelican Post and Coast Community Chronicle. Please subscribe to our Social’s Youtube channels, Instagram and Facebook page for updates during the week. Thank you for watching, see you next week.

All our video stories are here: https://coastcommunitynews.com.au/news/video-news/