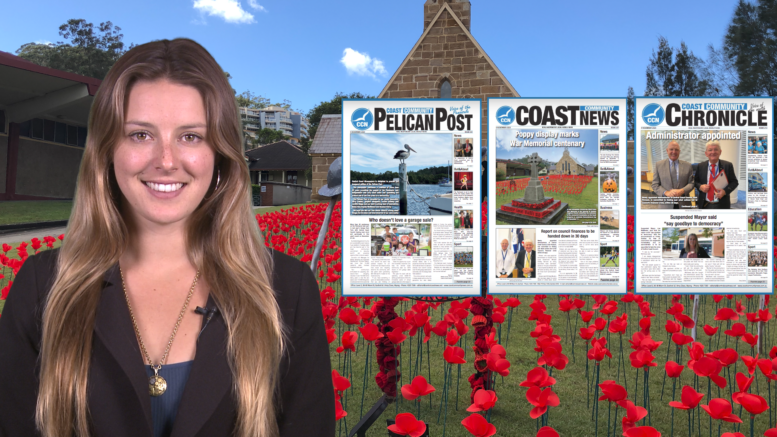 The Central Coast officially met our Batman and Robin at the beginning of the week with the appointment of Dick Persson as Interim administrator. Accompanied by Rik Hart as acting CEO, the two men have committed to finding out what actions led to the Council’s financial crisis within 30 days. We were there at this announcement to see what Mr Persson had to say.

Nurses and midwives were out in force on Wednesday, campaigning for increased staffing numbers in hospitals and care facilities. We talked to one of the nurses Candice McCartney at the protest

We spoke to Nerida Riley about why she was taking part in the campaign.

The Central Coast Knitting Nannas local group protested ooutside MP Lucy Wicks office in support of the Climate Action bill that will be tabled in federal parliament this month.

A new installation around the Celtic Cross War Memorial in the grounds of Gosford Anglican Church celebrates the centenary of the memorial’s installation as the Coast prepares to celebrate Remembrance Day on November 11. The Day marks the day World War One ended, at 11am on the 11th day of the 11th month, in 1918.

A funky new dance studio has been opened by Lauren Blomdahl in Erina called MILK, standing for Movement Individuality Love and Knowledge. We talked to her earlier this week about what it is all about.

The team at Central Coast Newspapers are delighted to present the first edition of the Coast Community Pelican Post, The voice of the Peninsula. The newspaper continues a tradition of more than 20 years providing the people of the Peninsula real, independent and very local news and upholding the critical role of the free press in a democracy.

The Pelican Post is compiled by senior journalist Terry Collins, graphic designers Justin Stanley and Lucillia El-u-ga and a team of journalists Maisy Rae, Haakon Barry and myself. We hope you like our title which reflects, among other things, the timeless and wise observer of our community. The Pelican Post is available at our usual distribution spots or online.

The Berkeley Vale Panthers have pounced on their third successive Newcastle Rugby League Premiership, after toppling the Aberglasslyn Ants 24-14 in the grand final of the Women’s Tackle Competition. Now in the offseason, Panthers’ President, Ken Smith said they had upcoming NSW Rugby League Country Championship trials to consider, with the club now awaiting word on what next year’s season will look like across the board.

Emerging youth fullback, 20-year old Matt Hatch, has signed a scholarship deal with the Mariners and will now have his chance as part of Alen Stajcic’s squad for the next A-League season.

The opportunity is a dream come true for Hatch, who began his football journey with the Woy Woy Roosters, before joining Kincumber and eventually the Central Coast FC representative program.

Mariners’ A-League Head Coach, Alen Stajcic, welcomed Hatch onboard and said that it was great to see a local talent coming through.

And a quick update on the ownership of the Mariners team with reports that negotiations between FFA and Abdul Helou’s legal team are still progressing, we will keep you updated as news comes to hand.

Now we all know of someone who has been stuck in the two-week hotel quarantine. Close quarters, not being allowed to go outside, bad food. But we spoke to a family whose experience has not been as bad as you would expect.