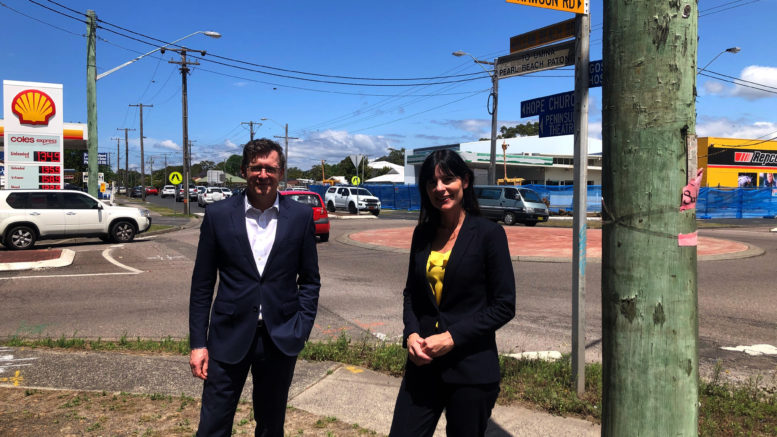 Member for Robertson, Lucy Wicks, and Minister for Population, Cities and Urban Infrastructure, Alan Tudge at the Rawson Rd intersection.

One of the Peninsula’s most notoriously gridlocked intersections is to receive a $33M overhaul in the next two years.

The roundabout at the Rawson Rd/Ocean Beach Rd intersection at Woy Woy will be demolished to make for road widening and the installation of traffic lights, with an extra $16.7M allocated to the project in the recent Federal Budget, doubling original estimates for the work.

Minister for Population, Cities and Infrastructure, Alan Tudge, was on site on October 30 to inspect the bottleneck with Member for Robertson, Lucy Wicks.

Tudge said the project was the single biggest infrastructure investment the government has made.

“This project is especially important as Ocean Beach Rd is one of only two road corridors between Woy Woy and the suburbs of Ettalong Beach and Umina Beach,” he said.

“It’s a big commitment, but I know how much of a difference this will make to the hard-working people of the Peninsula.”

Tudge said planning for the major project would begin next year, with construction hopefully to begin early in 2022 and take approximately six months to complete.

Wicks said the project would directly impact the lives of thousands of residents across the Central Coast.

“Following additional planning, costs have been revised for the Rawson Rd project in order to accommodate the significant work required,” she said.

“This includes utility relocation, removal of the existing roundabout, road widening and construction of signal equipment.

Manufacturer Kevin Dewar, who has owned and operated Dewar’s Cabinets near the intersection for more than 35 years said traffic conditions have been deteriorating at the site for a long time.

“The intersection has been getting worse over many years with more and more people deciding to call the Peninsula home,” he said.

“These upgrades will benefit those who use this intersection and it is great to see the government supporting the people of the Peninsula.”