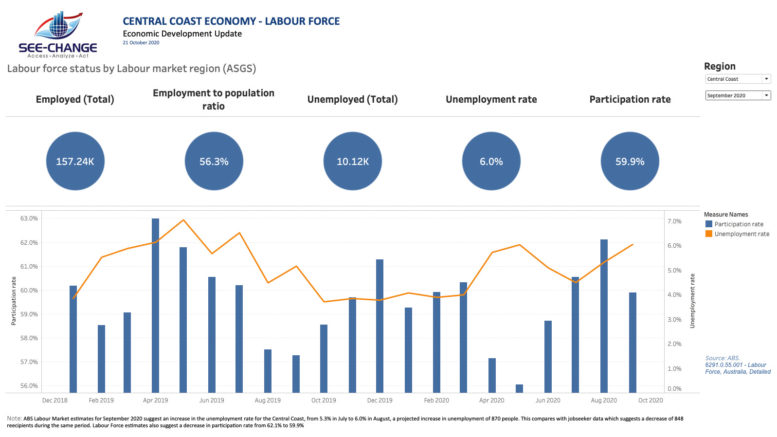 ABS Labour Market showing an unemployment rate of 6% for September.

The official unemployment rate on the Central Coast has increased to 6.0 per cent from 5.3 per cent, although more jobs are being advertised in the region and youth unemployment has dropped.

Data taken from the data analytics company, See-Change, shows there were 1,365 job vacancies on the Central Coast in September, an increase of 13 per cent from the previous month and 14 per cent year over year.

However, there are still 22,717 people on Jobseeker and 21,352 people still registered as either unemployed or underemployed.

Founder of See-Change, Patrick Spedding, said there are two different data sets show a different interpretation of unemployment on the Coast.

“This compares with jobseeker data which suggests a decrease of 848 recipients during the same period.

“Labour Force estimates also suggest a decrease in participation rate from 62.1 per cent to 59.9 per cent.”

This decrease in participation rate, which is the number of people actively working or looking for work, could be due to the lack of job availability meaning people have stopped actively looking.

The drop in people on the Jobseeker supplement could be due to payment cuts in September.

Despite these statistics, the labour force market in the region is still following a positive trend with the Jobseeker per Job Vacancy rate for September halving since June.

There are now 17 people to one advertised job, compared to 34 per job four months ago and a national average of 13 jobseekers per vacancy.

Spedding’s data also looked at Jobseeker data for each suburb.

“Interestingly, while the majority of jobseeker recipients appear to be in areas including The Entrance, Wyong, Charmhaven, San Remo and Woy Woy, when looking at the per cent increase in Jobseeker recipients per suburb over the COVID period (Mar-Sep), the areas worst affected include Terrigal, Avoca and MacMasters Beach,” Spedding said.