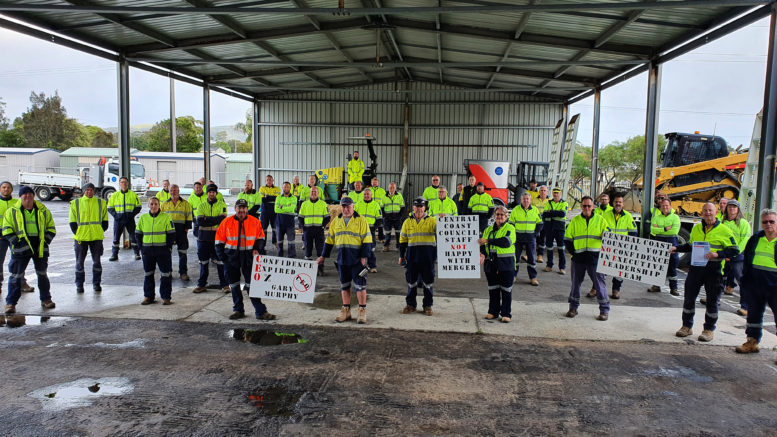 Hundreds of United Services Union (USU) members at Central Coast Council depots have unanimously supported a Motion of No Confidence in Council Chief Executive Officer, Gary Murphy, and all members of the Executive Leadership Team (ELT).

Mass meetings of USU members have occurred at numerous Council depots during the past fortnight with workers expressing their strong, collective voice on issues of major importance.

The workers say that the shambolic attempt of the ELT to manage Council finances was unacceptable and had continual consequences for staff wages, job security, Council services and their reputation.

They said the shameless approach of putting all Council workers’ wages at risk on October 20 in a bizarre attempt to force NSW Government intervention to clean up ELT’s mess, required USU intervention to ensure that wages were paid through both Ministerial and NSW Industrial Relations Commission interventions.

In a statement to the Chronicle, the workers said that the ELT’s financial mismanagement led to lower job security for USU members, with the payment of weekly wages and Council’s financial future still not guaranteed, while rash decisions are leading to less take home pay and lower conditions of employment.

“There’s a perception of double standards of accountability, one for employees and one for the ELT, whereby employees are expected to uphold policy and procedures, while the ELT are self serving and seemingly not accountable, despite the apparent financial disaster,” the statement said.

It went on to say that there’s a perception of deliberate misrepresentation by the ELT of the Council’s finances over a long period, which has now led to this current dire situation.

The workers say that their vote of no confidence also came about because of the failure of the ELT to provide any answers or information to the ratepayers or the workforce on how this financial mess occurred, or any real measures that will protect workers and community services.

USU organiser, Luke Hutchinson, said that as a result of this collective action, significant progress was now being achieved, and a meeting was held on Thursday, November 5, between USU General Secretary, Graeme Kelly, Administrator, Dick Persson and Acting CEO, Rik Hart.

It was confirmed that all weekly wages, entitlements and superannuation are safe and guaranteed to be paid as normal each week.

“The union was pleased with this initial engagement with Mr Persson and Mr Hart, with ongoing dialogue planned to assist in resolving all outstanding issues and the financial mess at Council,” Hutchinson said.

“Our members from all areas of Council have made a strong and proud collective stance to the management of Central Coast Council,” he said.

“Members in their hundreds have collectively said to the CEO and his Executive Leadership Team that enough is enough.

“Our members are attempting to force Mr Murphy and his team to listen to their very real concerns about the mess that they have created, which has now been left to the workers and the union to clean up.

“Concerns about the lack of genuine consultation, threats of non-payment of wages, the Council’s previous proposals of removing employee’s protection of wages and conditions, and a spike in industrial disputes has led to our members’ total frustration with the leadership of Central Coast Council under Gary Murphy.

“It is no surprise that members have taken this strong collective stance,” Hutchinson said.

Central Coast Council was contacted for comment, however, a response was not received in time for publication. Administrator Persson asked CEO Gary Murphy to take extended recreational leave but was quick to point out that “it does not reflect that he’s done anything wrong”.