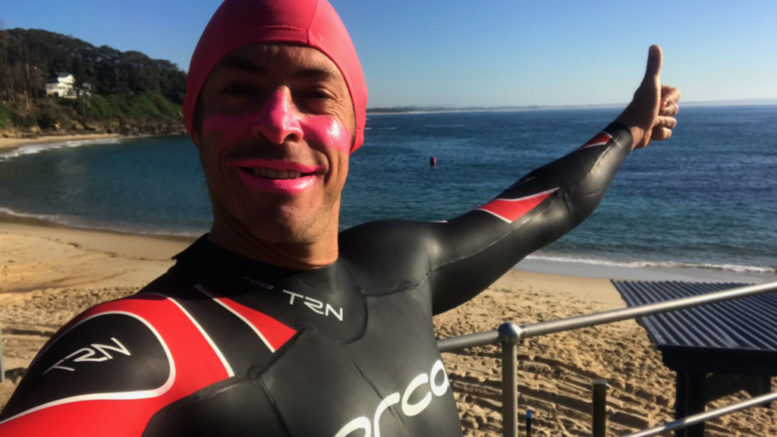 The countdown is on with three weeks to go for Bryan Dorfling’s 100km ocean swim from Bondi Beach to Budgewoi on December 4, with over 50% of his fundraising goal already reached.

Dorf’s Bondi 2 Budge swim is raising money and awareness for Camp Breakaway, a respite care facility for children and adults with disabilities.

As a long term volunteer at Camp Breakaway, Dorf wanted to help generate interest and funds for the facility after its temporary lockdown during COVID-19.

With $5,200 already raised for the ocean swim, Dorf said he was happy with how well the community had responded to the fundraiser.

“It’s been fantastic, and we have been very lucky,” Dorf said.

“Things are going really well, and it’s not just about the funds either, it’s about bringing some awareness of what we are doing at Camp Breakaway.”

Dorf said he had received coaching, learnt new techniques, and been in the water nearly every day to keep up with his training regime.

Unfortunately, it hasn’t been entirely smooth sailing, with an ear infection stopping Dorf in his tracks five weeks out from the big swim.

“I’ve been prescribed drops, tablets, antibiotics, and I haven’t had much improvement, so hopefully the EN&T specialists will be able to sort me out,” Dorf said.

“If I have to stay out of the water for another week, then I’ve gotta do it, this swim and this fundraiser is super important, but my health and wellbeing is important as well.

“We still have three weeks until the swim, and I’m feeling optimistic, so fingers crossed.”

“Camp Breakaway has really enhanced my life, and it doesn’t just enhance the people with disabilities who come for respite, but everyone who visits,” Dorf said.

“It’s just a beautiful organisation, and I’m hoping that more people will get involved and see what we are doing and come be a part of our community.”