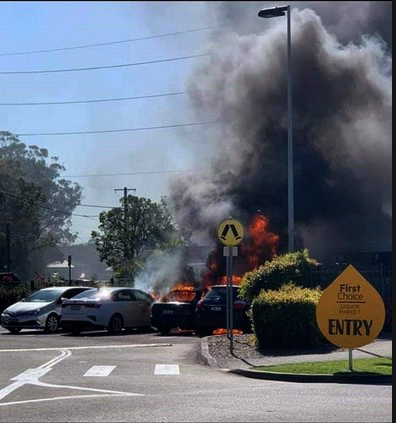 Police are investigating the cause of a fire which completely burnt out one car and badly damaged two other cars in the car park at Northlakes Tavern, San Remo.

Budgewoi and Doyalson Fire and Rescue NSW crews, and the Rural Fire Service, were called to the car park at about 4.15pm on Tuesday, November 10, to find three cars well alight.

Doyalson Station Officer, Lucas Ferrier, said it appeared that the fire started in the engine bay of the middle car which had just been driven into the car park.

“Once you’ve got a couple of cars next to each other, they catch alight quickly from the heat, so the two cars either side were on fire too, by the time we got there.

“We protected a fourth car in the row because it looked like it was about to go up as well, and we managed to bring the fire under control fairly quickly and remained on site until we were satisfied that the fire in the engine bay was out because they can burn for quite a while,” Ferrier said.