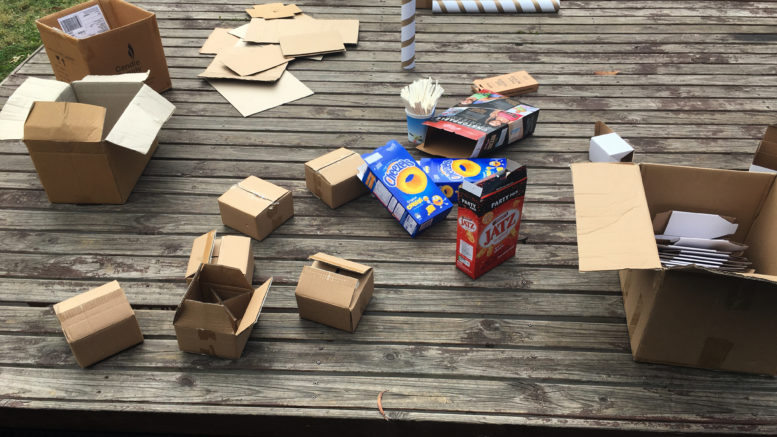 Looking for a way to entertain the kids for hours?

Valley View Public School OSH Club Program Coordinator, Jillian Ede, has been collecting candle boxes from local business, Club Candle, and giving them to the kids to use as building materials.

Ede said the children have loved receiving the boxes so much, they have suggested they continue to send thank you cards to the owner and staff within this local company.

“Club Candle is a local company based within our community which started as an idea, led to a plan and is now a successful business which is taking of,” Ede said.

“I had spoken to the lady to ask about what she did with the boxes, and she said she unfortunately had to the throw them out so I just reached out and asked if I could have them.

“We have been lucky enough that they have been donating all their empty boxes to us.”

Some of the masterpieces Ede said the students have been creating have been a sailboat, suits of armour, a police station with police wagon, a beyblades stadium, drums, and guitars among others.

“We can set them up for an afternoon with glue, scissors, textas and paint and the kids can be there for hours,” she said.

“The only complaint we get is them asking when we are getting boxes again.

“It is a win win for both us here at OSH and also Club Candle.”

Ede said boxes provide kids with endless possibilities which is why she thinks kids love them so much.

“Construction is the most popular learning activity children engage in within our service,” she said.

“During construction the children continue to further develop dispositions such as curiosity, cooperation, confidence, creativity, commitment, enthusiasm, persistence, imagination and creativity while using a range of skills and processes such as problem solving, inquiry, experimentation, hypothesising, researching and investigating.”

The recipe for a delicious 40th Anniversary

Free Arts and Craft Expo at The Entrance