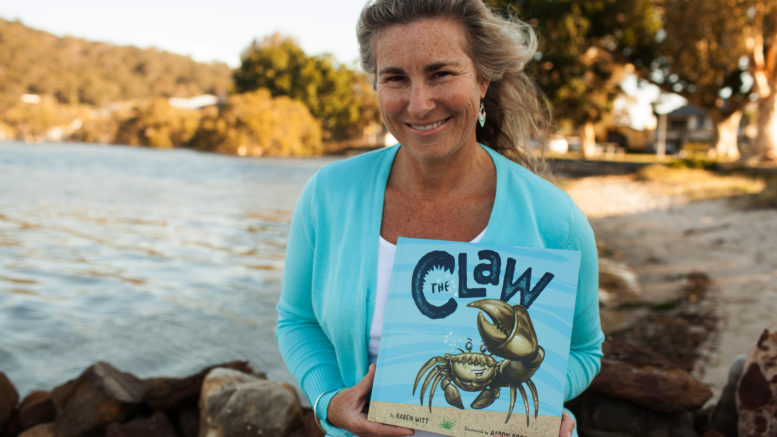 Karen Witt with her first published children’s book, The CLAW.

Karen Witt has written a rhyming book aimed at children aged three to eight, educating them on the themes of difference, acceptance, and self-worth.

The book, The CLAW, follows the adventures of the Australian mud crab, Clive, on his mission to stop a greedy fisherman from catching all the crabs in the bay.

The Central Coast author is an avid crabber and said the story was inspired by the fishing trips she took with her father on Brisbane Water.

“I have been a crabber for a long time,” Witt said.

“I have grown up going fishing and crabbing with my dad, but now he is 80, it is my turn to take him out.

“I take my daughters out now as well, and it is such a lovely family pastime.”

The book includes both mud and blue swimmer crabs as loveable characters and features an adorable starfish called Salty.

“The book is about the acceptance of Clive, who loses his nipper at the beginning, forcing him to hide away in shame,” Witt said.

“Part of his journey is learning to accept that he is different, and in the end, that difference is what makes him shine.”

Witt said the main character, Mr Beerbellio, may have been inspired by her husband and his friends.

“I was trying to think of what all fishermen have in common, and I settled on the fact that all of their names end in O and they all have beer bellies,” she said.

“So I just morphed the two together, and Mr Beerbellio was formed.

“Most people would be ashamed to be the inspiration behind that character, but my husband and his friends think they are celebrities.”

The CLAW is Witt’s first book and the first in a trilogy, with two more books planned for 2021.

“It has taken three years because I wrote it for my kids and then put it away and then got it back out again – it has been a journey,” she said.

“With this book, I wanted to create a story that was fun and engaging for both adults and children.

“It gives families a chance to read and laugh together.”

The CLAW is available in hardcover and e-Book and can be bought at Book Bazaar, Umina Beach, and through the website www.theclawbooks.com.au