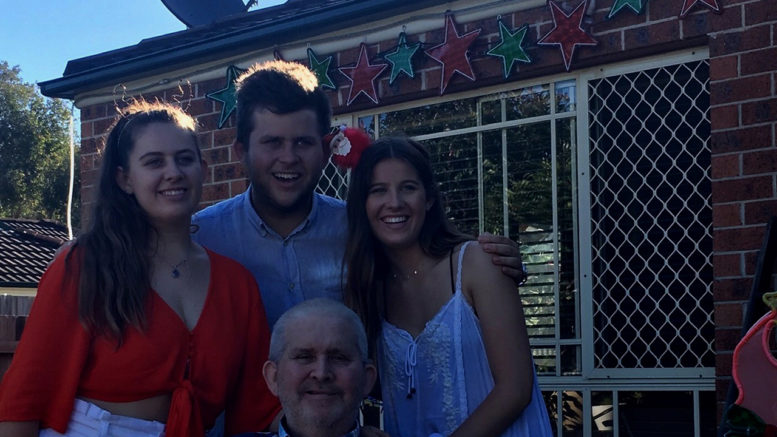 A Bateau Bay local is participating in Stride4Stroke, a fundraiser dedicated to helping people stay active and raise money for stroke awareness.

The Stroke Foundation’s annual physical activity campaign encourages participants to set their own activity goal, to be completed anywhere and any time within November.

Stephen Siegel, along with his two younger sisters, Emily and Sarah, have decided to join Stride4Stroke after their father, Bill Siegel, suffered a stroke in August 2017.

“We signed up, not only to raise money, but to raise awareness for strokes,” Siegel said.

“When dad had his stroke, we didn’t really know what one looked like.

“Looking back on it now, he was giving all the tell tale signs that he was suffering from a stroke, but we just had no idea what it was.

“By the time he had one, it was too late, so I think the key point for my sisters and I to do Stride4Stroke was to spread awareness and help prevent this from happening to another family.”

Siegel said his father had lost movement on the left side of his body and was now living in a nursing home.

Stride4Stroke activity goals include anything from running, walking, riding, or swimming, with a personal or team goal set for the month.

Siegel’s team, consisting of his two younger sisters and eight other participants, are called ‘The Billy Seagulls’, a name that Siegel believes is naturally fitting to the cause.

“My goal is 150km walking and running over November, and 900 km between all of our team members,” Siegel said.

“Anyone can donate or join the team, and you can run, walk, swim cycle, even do cartwheels.”

“Summer is on its way, and it’s a great time to set a goal to improve our health, feel good and raise money for the Stroke Foundation in the process,” McGowan said.

“It’s time to take our active gear outside of the home office and onto pavements, beaches and into parks!”

One in four people globally will suffer from a stroke in their lifetime, with eighty per cent of strokes preventable by maintaining blood pressure, cholesterol, eating healthy, and exercising.

Every dollar raised for Stride4Stroke will go towards stroke prevention, awareness, and programs to help survivors and families through the recovery journey.