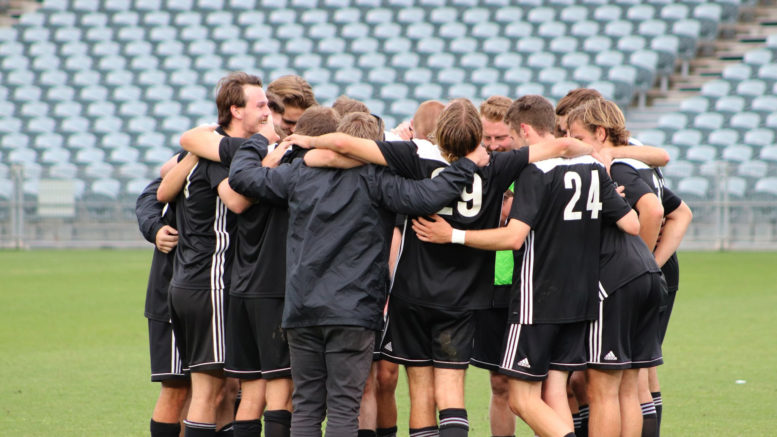 Killarney District Soccer Club has lost out on its fifth consecutive Battlewin Premier League title after going down to Terrigal United 1-nil in the 2020 grand final at Central Coast Stadium.

With the O’lads dominating possession in the first half, things looked grim for the reigning Premiers, but two disallowed Terrigal goals off the back of positional mistakes, and some fantastic saves from Declan Drake and Sam Kirk, kept Killarney’s penta-premiership hopes alive as they looked for chances to turn the tide.

But it was Terrigal who would open the scoring, when Ryan Pearce cleverly played the ball in front of Anthony Pace, who chipped it over a back peddling Drake, who could do nothing but watch as the ball found the back of the net.

Going into the second half with a renewed sense of purpose, Killarney came alive, pressuring the O’lads in pursuit of the equaliser, but just as Terrigal showed in the first half, small mistakes proved costly for Killarney, with a missed Tim Knight header and double yellow cards to Ethan Hall, setting Killarney up for a do or die final quarter.

The equaliser they longed for almost came from Matt Hall, but a weary Terrigal were able to clear the ball away in time and ride out the final minutes of the match to take the 2020 BPL title, the first in the club’s 54 year history.

“A big congratulations to Terrigal on their first BPL win.

“They were the better team on the day, and we wish them well.”

Having set the benchmark for excellence in local grassroots football for close to a decade, Gale contributed his club’s success to its culture and development driven philosophy and the people that implement it.

“At Killarney, we don’t place expectations on our players.

“Our focus has always been on youth development which we feel drives success, and the last five years have seen coaching staff and players work together to deliver above and beyond,” Gale said.

According to Gale, the club also puts emphasis on consistency, with consecutive Minor Premiership titles more important to him than grand final silverware.

“Final series come down to whoever is best on the day, but being the best over a standard 22 or 24 round competition to us is the football way.”

Grateful to have had a competition to contest at all, Gale also paid tribute to the efforts of his Club Committee and Central Coast Football (CCF).

“I would like to thank Brett Scrine, Darren Sprod and all those at CCF who worked so hard to ensure that we had a season amid a global pandemic.

“Their efforts were outstanding during such a difficult period.

“Likewise, I’d like to thank my committee and all of our club volunteers.

“They are the secret to our success and what makes Killarney District SC the community club it is today.”

“I’m looking forward to getting back to what’s hopefully a more traditional season in 2021,” Gale said.

“Everyone at Killarney SC could take heart in what was another phenomenal year for the club with the First Grade BPL Minor Premiers for the fifth consecutive year, and Reserve Grade and Under 21’s being 2020 Premiers.