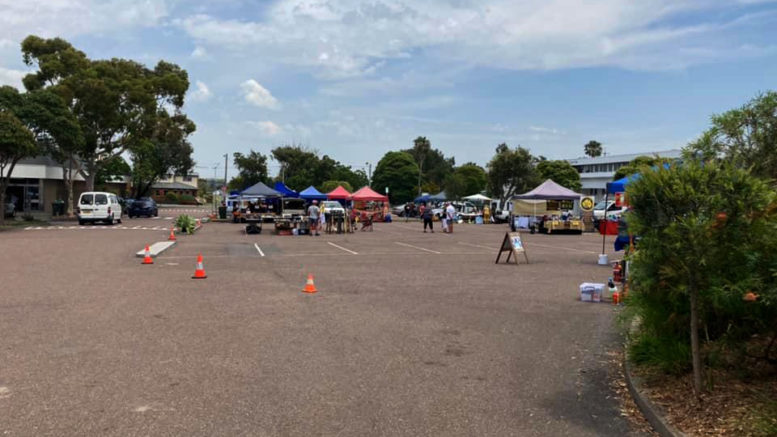 Toukley markets, a shadow of their former self

A newly-formed Save the Traditional Sunday Markets Group at Toukley is determined to have the markets back in local hands again and restore the community social atmosphere.

Stallholders, community members and businesses in the Group say that a decision by Central Coast Council to allow a Sydney business, Organic Farmers’ Markets, to take over management has ruined the market.

“We feel like our markets have been stolen out from underneath us,” said one of the stallholders, Mark Turner.

Many stallholders have boycotted the market because of high charges and moved on to markets at The Entrance, which the Group says is a major loss to the Toukley community.

Now, there is only a handful of stallholders at the market.

The once bustling markets with up to 85 stalls and live entertainment every Sunday, was not only a shopping and social event but a significant bonus for cafes and other businesses surrounding the Village Green.

Group spokesman, Ernest Buckley, said profit from the markets of about $20,000 a year went to Council community section coffers and the aim was to keep the economy local by having a local operator.

The Group has protested to Council, and the community has rallied behind a petition and sent many letters of protest to have the community-run markets reinstated by a local not-for-profit group, and Toukley Lions Club is interested in doing so.

Until recently, the market was run by Greater Toukley Vision (GTV), a Town Centre management organisation under the auspices of Council, and supervised by Janet Holmesby, but COVID-19 interrupted and twice the market had to shutdown.

The GTV Board decided not to continue, despite Holmesby’s commitment to go on and overcome Covid-safe issues.

Council then made the decision to put operation of the market to tender, without community consultation, and ultimately chose Sydney-based business, Organic Farmers’ Markets.

“Under these new managers, stallholders were faced with a large increase in fees and new conditions caused hardship, which ruled 85 percent of them out of being able to operate their stalls,” Group spokesman, Ernest Buckley said.

“With Council introducing this new high-cost operator, this situation has become detrimental to the wellbeing and livelihoods of many people.

“Many of them are pensioners trying to make a few extra dollars, and they enjoyed the social network and atmosphere of market days.

“The locals use the markets to shop for a variety of lower cost needs and is a major social location.”

Buckley said the Group wanted a not-for-profit operator, like the Toukley Lions, which aids better outcomes for local people and businesses.

“All groups affected also want to be part of the decision making process to select a new operator and not be excluded,” he said.

“It seems the new operators are talking about closing because it’s not viable because they’re looking for big dollars out of it and that’s not going to happen,” Buckley said.

When the Chronicle contacted Stephen Chourlton of Organic Farmers’ Markets to ask his vision for the market and his response to the Toukley stallholders, he said he would rather leave discussion between himself and them.

Meanwhile, a Council spokesperson said issues around complying with COVID-19 guidelines caused trade to cease at the markets.

“To ensure a weekly market continued in Toukley, Council issued a Request for Proposal to identify a new operator and one was chosen from the only responses received from existing businesses operating markets on the Central Coast,” the spokesperson said.

“Council is listening to feedback being received by the community and is working with the existing operator on a solution.”

A meeting between members of the Save the Traditional Sunday Markets Group and Council staff has been scheduled for Thursday, November 26.

Councils commit to a sustainable recovery